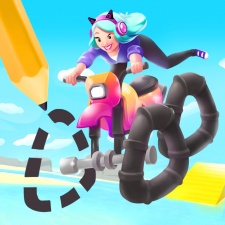 Voodoo's Scribble Rider was the most downloaded game in August as it racked up 44.6 million according to Sensor Tower.

It proved most popular in India, where 16.7 per cent of installs were accumulated, followed by the US with 12 per cent. Voodoo's title was a new entry last month, and took the top spot on both storefronts.

Meanwhile, Brain Wash by SayGames – another new entry – came in at No.2, a position it also held on Google Play. The game generated around 30 million installs, 17.2 per cent of which came from India, while the US was responsible for just over 12 per cent.

To round up the Top Five, Voodoo's Cube Surfer came in third place, though it took second position on the App Store and was a new entry on Google Play, where it also claimed third. Next, Sybo Games Subway Surfers – which has broken three billion downloads – sits at No.4, a position it held on both iOS and Android. Finally, Crazy Labs' Tie Dye took fifth place, after finishing at No.8 and No.5 on the App Store and google Play respectively.

Meanwhile, a new entry to the overall Top Ten was Among Us, which claimed the No.9 spot, though it did take fifth place on the App Store. It recently hit 86.6 million downloads after a month-on-month surge of 661 per cent last month.