Developer The Breach partners with Freeverse.io 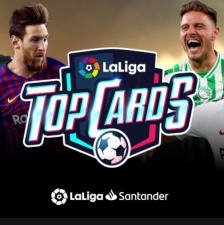 Barcelona developer The Breach Studios has announced it will be using blockchain to release a new class of in-game assets for its officially licensed mobile game LaLiga Top Cards 2020.

This is a futbol league manager game, in which players put together teams with cards based on the stats and likeness of real-world footballers.

The announcement arises from a deal with fellow Barcelona company Freeverse.io, which has built a platform enabling game developers to securely store digital assets and simulate games using blockchain technology.

Freeverse is using this technology in its own game Goal Revolution, which is currently in beta testing.

Using blockchain means that players of both games will be able to trade their in-game assets within the game economy and potentially cash out for real-world currency too.

“We are very excited to partner up with our friends at The Breach to deliver truly collectible and tradable virtual cards to La Liga fans,” stated Freeverse CEO Alun Evans.

“Rarity and trading are key components of card games in the real world, and it is fantastic to reproduce this experience in the digital space.”

Video interview: Freeverse.io on living NFT assets and play-to-earn as a short-lived solution