Revealed: the first set of speakers for the fourth online-only conference in the series, this November 9-13 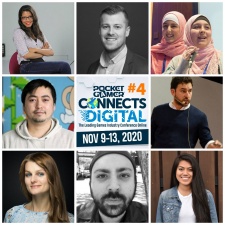 Pocket Gamer Connects Digital #4 goes live on November 9th to 13th and we’re excited to announce our first speakers for the online conference.

Taking place completely online, the conference will see 1,500+ virtual attendees from all around the world log onto their computers to do business, network and learn from more than 200 of the world’s leading authorities in the games industry.

Each talk, panel, keynote and seminars will be streamed live, recorded and made available on demand, so with a ticket you can interact with our speakers during their talks through our Q&As or catch up at a later time if you’re unavailable for the stream.

And to give you a teaser of what’s to come, we’ve prepared an incredible first list of speakers. Read on to find out who you'll hear from online at Pocket Gamer Connects Digital #4 this November.

One of the many features at Pocket Gamer Connects Digital #4 is the Pocket Gamer Connects Careers Week, returning once more this November. Alongside the jobs listings, daily recruitment hour and Q&A sessions, we also have dedicated careers focused talks and panels. One such panel features Undead Labs’ senior design manager Nellie Hughes and Genius Academy of Interactive Entertainment’s industry relations coordinator Cami Smith discussing how you can rocket launch your games career during a pandemic.

We're delighted to announce that Space Ape Games’ Deborah Mensah-Bonsu joins us again this November for a superstar session on how we can use games for social impact and how we can create better access to our industry.

Sakura Games’ co-founders Sham and Jana Al Bdour unite for a joint session on games in education, while Intellivision Entertainment’s president of European operations Hans Ippisch talks about how we can get back to the core roots of gaming as families look at technology in a negative manner.

Game Jolt’s co-founder and CEO Yaprak DeCarmine moderates a panel focusing on the topic of building a community, while Square Enix’s product manager Karla Reyes features on a panel to discuss how we can go about creating real inclusion in teams/games.

Aras Senyuz takes a look at the hardcore/midcore games situation in Asia and the West, while comparing between the markets and how big they are still

Tencent’s senior consultant Aras Senyuz takes a look at the hardcore/midcore games situation in Asia and the West, while comparing between the markets and how big they are still compared to the hypercasual market, despite hypercasual being the 'hype at the moment'.

Staying with the international theme, Lumikai Fund’s general partner Justin Keeling shares his insights on working with publishers from different cultures with a panel of other experts.

ArenaNet’s senior manager of live operations Daniel McLaren and Headup’s CEO Dieter Schoeller feature on a panel where they discuss the advantages and challenges of working with licensed IPs. Independent consultant Kirstin Bosc focuses her session on providing business development training for indies.

Angel Luis Sucasas Fernandez focuses his session on how to apply the Stanislavski method to animation in order to narrow the gap between golden path, backtracking and secondary content

Is narrative just for the indies? Valiant Game Studio’s founder and creative director Anna Jenelius, with a panel, looks at the structure and approach of narrative in triple-A studios compared to indies.

THQ Nordic’s art director Daniel Candil delivers a seminar on environment storytelling and the relation between the art department and the design department. Tequila Works’ narrative director Angel Luis Sucasas Fernandez focuses his session on how to apply the Stanislavski method to animation in order to narrow the gap between golden path, backtracking and secondary content. Masquerade Media’s president Dayan Paul looks at the differences in creative development.

Is esports becoming all about brands and prizes? Endpoint Esports’ COO Peter Thompson discusses, with a panel, how we can go about keeping esports about esports. InfluencerStuff’s CEO Richard Little also features on the Esports and Influencers track.

Beyond mobile - and beyond games!

CCP Games, creators of EVE Online, had estimated that releasing a mobile version of their sci-fi spacefaring MMORPG, called EVE Echoes, would have a positive impact on their award-winning PC game. Directly after EVE Echoes’ debut on iOS and Android, the boost seen in first payments, second logins and reactivations of inactive players for EVE on PC far exceeded CCP’s expectations. In this talk, EVE Echoes’ senior brand manager at CCP, Ragnar Kormaksson, will share CCP’s discoveries and key learnings on what underpins this astonishing halo effect.

Numbers Only’s transmedia development Seth Crofton discusses transmedia and brands. And in what should be a thoroughly entertaining peek behind the curtain, LudoCraft’s global sales and brand manager Anne Ryynänen discusses working with companies that know nothing about games.

And that's just for starters! We're thrilled to reveal that we'll also be joined by:

These are amazing speakers you will want to learn from. And if you book your tickets now, you could save more than $310 with our Early Bird prices!

If you book a ticket to November’s G-STAR conference while you’re there, you can save an additional 20% too.