Revealed: the final set of speakers for the fourth online-only conference in the series, this November 9-13 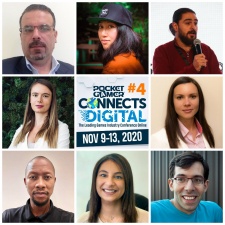 We’re less than two weeks out until Pocket Gamer Connects Digital #4, and we’re excited to reveal the final set of expert speakers and companies who are taking part!

Going live on November 9th to 13th, the online conference features live streamed talks, panels and workshops offering the opportunity to interact with speakers and your fellow attendees. All sessions are recorded and made available on demand too, enabling you to catch up at a later point if you can’t quite make the stream.

And today we're excited to unveil more exciting speakers including Ubisoft, Play 3arabi, King Abdullah II Fund for Development, GameAnalytics, EA and more! Read on to find out exactly which leading industry experts are looking to share their expertise with you at Pocket Gamer Connects Digital #4.

All about the MENA

In November last year we brought our Pocket Gamer Connects series to Jordan for the first time which added to the support of the Middle East and North African (MENA) region. Unfortunately we’re not returning this year due to the pandemic, but whilst we’re not able to travel out to Amman, we’re going to celebrate and support the creativity and potential of the MENA region with some dedicated segments of Pocket Gamer Connects Digital #4.

One way we’re celebrating the MENA region is hosting a dedicated side-event. The King Abdullah II Fund for Development (KAFD) and Jordan Gaming Lab present Game Development 101. KAFD’s very own program and initiatives manager Amjad Alloush joins Chris James for a fireside chat where they will take a look at the current state of the MENA market during this event.

Keeping the focus on the MENA region, Lahza Games’ CEO and co-founder Mo Fadl joins us for another superstar session, introducing and highlighting the MENA region to the world. Fadl also features on a panel alongside Hiba Muhareb and other speakers as they discuss how big can the MENA market get. Virtual Reality Agency’s managing director Lebo Kambule leads a session looking at virtual human advancement in Africa.

All about the money!

Pocket Gamer Connects Digital #4 also features talks and panels about how to raise investment, such as BreakawayGrowth Fund’s co-founder and managing director Chris Albinson and Hiber’s chief strategy and marketing office Sean Kauppinen’s panel on how to attract the right investor.

Wiggin’s corporate director Ciaran Hickey takes a dive into the portrait of the market after mergers and acquisitions with a panel. Candywriter's founder and COO Nadir Khan features on a fireside chat which looks at the journey from indie development to investment.

Taking place alongside day three of Pocket Gamer Connects Digital #4, the Games Industry Investment Summit 2020 in association with Enthusiast Gaming goes live on Wednesday, November 11th. This event has been designed as an ideal introduction to the latest developments, trends and investment opportunities in the games industry, and features many talks and panels from investment experts.

Tickets for the Games Industry Investment Summit 2020 are FREE and available now.

Back with the main Pocket Gamer Connects Digital #4 conference, AdColony’s team lead of business development Aykut Basturk focuses his superstar session on seeing whether your revenue and user growth strategy is ready for 2021.

Misc Games’ CEO Gøran Myrland takes part in a debate on how to take advantage of all available stores, while another group session sees Boombit’s VP publishing Jon Hook discuss and list some of the ways you can spot a bad publishing deal.

Rockhead Games’ producer Rodrigo Scharnberg analyses the free to play model and compares it to premium play on consoles, while Springloaded’s James Barnard dives into publishing in the midst of the new consoles.

And you won't want to miss Fundamentally Games’ game design analyst Glyn Fairweather and his session on designing and maintaining your game economy.

Live ops, the IDFA and hypercasual

We’re excited to be joined by EA’s head of product management Chong Ahn as he shares his expertise in the sphere of live ops. Dodreams’ CEO Erik Pontiskoski looks at how live ops can be used as a marketing strategy with a panel.

Tilting Point’s head of data science Andre Cohen hosts a superstar session that focuses on the IDFA and how the right publisher can help you choose your tools, partners and prepare your data to avoid the ‘apocalypse’. Cohen also appears on a panel alongside Fyber’s VP product Alon Golan and other speakers to discuss how to prepare for the end of the IDFA.

Fuero Games’ CEO Stanislaw Fiedor and Newzoo’s market lead - mobile Tianyi Gu discuss what some of the effects of IDFA will have on the hypercasual genre.

In GameAnalytics’ CEO Ioana Hreninciuc’s superstar session, she dissects how hypercasual and casual games have been performing over the last year, while revealing key trends across core KPIs (like retention, session length and playtime for example). Hreninciuc will also zoom in on how these genres and KPIs perform across different platforms and in different regions.

It's been an 'interesting' year. Join Vitruvius Capital’s general partner Lennon Arcaro exploring what effects 2020 has had on the creative media and arts industries in what is sure to be a lively panel debate.

Another potentially provocative panel features Grey Alien Games’ director Jake Birkett and Indie Game Fest’s co-founder Stefan Schmidt as they look at whether ‘indie’ has become a dirty word. And sticking with the indies, Naavik’s lead design consultant Thomas Baker and Pixel Noire Games’ lead designer Javier Barnes take part in a discussion about whether narrative is just for indie developers by looking at the structure and approach of narrative in AAA vs indies. Barnes also features alongside Playright Games’ co-founder and designer Evtim Trenkov and Kooapps CEO Chun-Kai Wang on a panel focusing on ads as a tool for retention.

Imre Jele explain how Bossa Studios adapted a famous novel and created a game with a strong political message.

Thoughtfish’s CEO and creative director Christina Barleben appears on a fireside chat to discuss the world of augmented reality. University of New Haven’s executive director of esports Jason Chung discusses how we keep esports about esports. Green Man Gaming’s influencer manager James Spicer looks at whether the influencer market has matured with a panel.

We'll be interested to hear Bossa Studios’ co-founder and creator-in-chief Imre Jele explain how they adapted a famous novel and created a game with a strong political message.

Don’t miss out on this amazing opportunity to learn from the biggest names and brightest minds in the games industry. Book now and save more than $190 with our Mid-Term offer before prices go up at midnight this Thursday, November 29th.