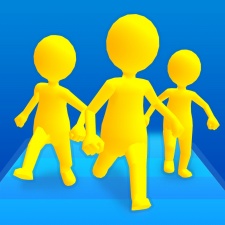 Supersonic Studios' Join Clash 3D was the most downloaded mobile game in January 2021, according to Sensor Tower.

The hypercasual title managed to pick up 27 million installs last month, a 3,300 per cent rise year-over-year. It proved to be most popular in India where 38.3 per cent of its downloads were accumulated.

Meanwhile, dropping from first to second place, for the first time since August, is innerSloth's Among Us. The US accounted for the majority of installs with 15.5 per cent, while Brazil trailed with eight per cent.

Among Us has proven popular since it saw a surge in downloads last summer. In November, the social deduction title hit both 200 million installs and 500 million monthly active users.

Innersloth brought its game to Nintendo Switch in December 2020 and managed to shift three million copies in one month.

The rest of the top five downloaded games last was rounded off with Say Games' DOP 2 and Sushi Roll 3D, with Bubblegum Games taking the No.5 spot with a new entry, Project Makeover.

Project Makeover proved to be the most popular title on the App Store while Join Clash 3D took the top spot on Google Play.