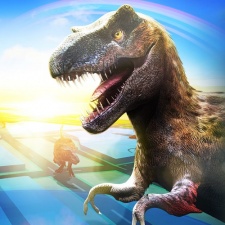 Launched in May 2018, the free-to-play location-based AR title has continued to find an audience of devoted players, accumulating 2.7 billion total game sessions and taking on more than one billion in-game battles.

Players have spun 4.5 billion Supply Drops (points of interest on the map), collected 77.4 billion Tyrannosaurus Rex DNA and unlocked 175 million of the dinosaurs. On top of this, over 300,000 Alliances have been created with nearly 300 million dinosaurs unlocked in total.

When it comes to revenue, Jurassic World Alive has earned $102 million from player spending across the App Store and Google Play (via Sensor Tower). $40 million of that figure originated within its first nine months of release.

Jurassic World Alive is available to download across the App Store and Google Play.

The data will be one of several reasons why Jam City has decided to acquire Ludia for an estimated $175 million.

We previously spoke to Jurassic World Alive producer Maggy Larouche about making a location-based game in 2020.