The runner was launched in June 2013 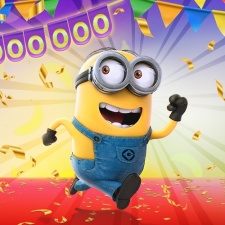 Gameloft has revealed that Minion Rush has exceeded one billion downloads eight years after originally launching.

Based on the Despicable Me franchise from Universal Pictures and Illumination, the popular runner has cemented itself as the first mobile game based on a film property to reach this milestone (according to the announcement).

Minion Rush follows the tiny yellow henchmen as they must compete in different challenges around the world as well as a mysterious lair created by their master Gru.

Released on June 10th, 2013, players have collected 90 trillion bananas and completed more than 216 billion miles running in-game, equalling a total of 3.4 billion hours spent playing the game. The announcement was accidentally made early by the developer back in April.

"This remarkable milestone is a testament to the strength and longevity of this franchise and our close collaboration with the teams at Gameloft and Universal,” said Illumination CEO and founder Chris Meledandri.

Gameloft game manager Stas Sadkeyev added: "We are so honoured to be such an important part of the Minions story, speaking to and engaging with players and fans from all around the world. Very rarely do games reach this milestone, and everyone here at Gameloft is humbled to have made it."

Universal games and digital platforms SVP Jim Molinets concluded: "The game’s tremendous growth and success since 2013 has really been fueled by fan loyalty and appreciation, and we will continue to entertain our players as they deepen their connection with the beloved franchise,"

Minion Rush is available to download across the App Store and Google Play.

Last month Meledandri was appointed as an outside director at Nintendo, likely due to his involvement with the upcoming Mario animated movie.

We recently spoke to Gameloft Brisbane creative director Jarrad Trudgen and art director Liz Ballantyne about how they captured the spirit of Apple Arcade title The Oregon Trail.