Debuting on mobile and MacOS 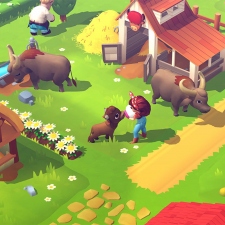 The worldwide launch of Zynga’s agriculture-simulation social game comes after 12 years and more than 700 million downloads of the original FarmVille.

FarmVille 3 was developed by Zynga's Helsinki studio and has been in soft launch testing since July 2019.

The familiar guide Marie is returning in this entry to welcome players back to the FarmVille community – and welcome new members – as they build homesteads, complete challenges, and meet other endearing characters and animals.

Some elements new to this entry are new customisable farms and animal husbandry. Players can raise baby animals from more than 150 breeds and are rewarded with goods like wool and butter for their parenting efforts.

New characters in this entry have skills like baking, fishing, and lumberjacking to assist players with their farm-building.

Players can also exchange goods with other players and cooperate to win events. Weather patterns can even be controlled with dynamic in-game mechanics to influence crop growth, among other things.

“FarmVille 3 immerses players in a visually stunning new FarmVille experience infused with the sense of adventure, social connection and farming spirit that hundreds of millions of fans have come to love,” commented Bernard Kim, President of Publishing at Zynga.

“We warmly invite a new generation of players to meet the delightful new FarmVille characters and lovable animals who thrive in a gorgeous countryside filled with heart and humour.”

Players who download the game within its first two weeks will receive a special starter kit with interactive features like particular decorative elements and the ‘Early Bird’ profile picture.