One last hurrah before the game taken offline on March 31st 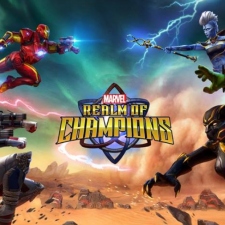 Kabam has revealed that its mobile MOBA ,Marvel Realm of Champions, has been removed from the App Store and Google Play.

Players are also now unable to make in-app purchases, and on March 31, 2022, the game will be taken offline.

Marvel Realm of Champions tweeted, "We’ve appreciated the time that you have spent with us, and are very sad to see our adventure come to an end."

The purpose of the game was to allow players to create a character, join a faction, and play in a competitive PVP with fast-paced action.

Whilst a reason for the game closing has not been provided, Kabam stated on the game’s website: "Despite making multiple adjustments and changes along the way, we have not been able to meet the vision that we had initially set." PocketGamer,biz has reached out to Kabam about the reasons behind the game shutting down.

To celebrate the game before its departure, more units will be given away, new weapons are being made available, and the game’s plot will be concluded.

Kabam noted that its sister Marvel title, Contest of Champions, is continuing and encourages players to take a look. Realm players are even able to join Contest with an ‘adjustment package’ based upon their progress.

Kabam concluded, "This game was a labour of love for us. We aren’t just game makers, we’re Marvel fans. When we ventured out to make a game where we could tell a new epic Marvel tale and give you the ability to create your own Marvel Champion, we were more than a little thrilled. From the bottom of our hearts, we want to thank each and every one of you for joining us on this journey."

Kabam has recently announced that Seungwon Lee will be taking on the role of CEO at the company, coming to the position from Kabam parent firm Netmarble.

A week after boycotts began, Marvel: Contest of Champions is rising back up the top grossing ranks