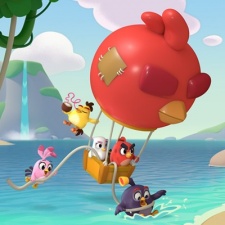 Rovio has launched the latest entry in the Angry Birds series, Angry Birds Journey, featuring the return of slingshot gameplay.

This entry is the first in seven years to use the slingshot puzzle game genre since a departure to and exploration of other genres. Its official release has come more than a year after the title first entered soft launch.

The casual gameplay has been reworked and modernised compared to the 12-year-old original, with a new plot based around the search of artefacts called Egg Wonders. These need activating by the birds before the piggies reach them.

Back to the nest

"The love for the original slingshot gameplay is still strong after 12 years. Today, with the global launch of Angry Birds Journey, we’re happy to present to players an all-new Angry Birds experience that puts the slingshot at centre stage," said Rovio CEO Alex Pelletier-Normand.

"Although much different from the classic games in its updated and streamlined gameplay, Angry Birds Journey is filled with the same satisfying gameplay and the same iconic characters that have defined the Angry Birds games over the years.

Pelletier-Normand continued: "We believe Angry Birds Journey has something to love for long-time Angry Birds fans, but is also more accessible and thus a great entry point for those who have never experienced the classic slingshot games."

‘Early bird’ players (those who download Angry Birds Journey from the App Store or Google Play Store during its first week) are set to receive helpful in-game items.

Another Finnish studio, Yahaha Studios, recently raised $50 million between three funding rounds, as it looks to create a "no-code" metaverse.