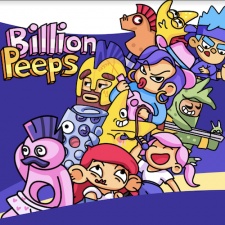 Hypercasual mobile games outfit Gismart has revealed that it is launching an NFT collection, BillionPeeps,

The collection has been launched as a way to celebrate the studio’s one billion downloads milestone, which it reached in December 2021.

Gismart has been exploring NFT gaming "for some time", culminating in the ongoing formation of an internal blockchain games division.

The NFT collection will be featured in the company’s upcoming project which is due to be released next year. Gismart NFT owners will be 'among the first' to participate in the in-game events and also have early access to in-game items.

Additionally, NFTs from the collection have been randomly distributed to 360 Gismart and Flime by Gismart employees, with all new employees recieving an NFT as part of the onboarding rewards package.

"Gismart’s landmark achievement of one billion downloads was the catalyst for our team to explore adding another dimension to our portfolio with crypto-powered games and NFTs," said Gismart co-founder and CEO Dmitri Lipnitsky.

"BillionPeeps is our first NFT collection from which we will launch our new exciting venture in the blockchain games."

The BillionPeeps collection is limited to 10,000 NFTs and are currently available via NFT marketplace OpenSea.