Indie stalwart Rami Ismail offers his bullish advice on independent developers to make a business case, and a radical rethinking on financing games 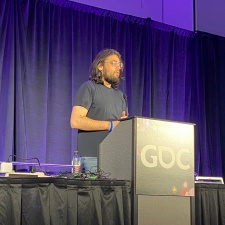 Since the closure of Vlambeer, Rami Ismail has offered a service to independent developers providing advice, and noted: “I realised most of you have the same problems.”

Ismail is bullish about how developers need to rethink how they regard their company: “Most of you don’t think about entrepreneurship. You want to be game developers,” and noted that the role of the company is to survive, not to make games.

Ismail identified core goals, with short-term goals being a priority in – making a game and shipping it without making a loss, which creates credibility. After proving you can ship a game, it’s important to continue to ship multiple games.

When selling a business case – a game which does not yet exist – developers are evaluated on reputation. Ismail stated: “The game is not the value of your studio. The way publishers, platforms, and audience value you is based on your reputation.”

Publishers have convinced indies that they fund your development. Instead, they are buying the publishing rights to sell your game.

Ismail stated: “Publishers will give you $200,000, and then turn to platforms and ask for $250,000,” supplanting their own risk. He continued: “Stop thinking of money like a human, and think of it like a business.”

Budgets typically range, for small, medium, and large independent titles, from $70,000-200,000, $300,000 to $3 million, and over $5 million. But the most important element is making it viable and proving it can make money back – Ismail recommends looking at comparable games and their approximate revenue, looking for titles that made 70 (worst case scenario), 130, and 300 (targets from publisher expectations) per cent their funding.

Ismail emphasises that the game budget has no relevance to how much money developers can ask for. The budget is a comfortable salary for yourself and your team, additional costs including offices and equipment, and a 30 per cent margin. Why? “Why the fuck not. It’s extra money.”