Fairness is “one of our tentpost pillars”, says Activision Blizzard as the team moves away from multiple and premium in-game currencies. 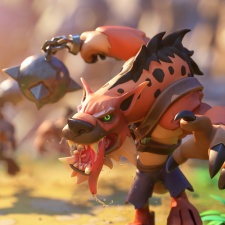 Recently, Fingersoft and Meta discussed how monetisation in flagship title Hill Climb Racing has developed over the years, particularly noting how its single in-game currency at launch has resulted in an difficult economy, “judging by today’s standards”.

However, Warcraft Arclight Rumble is confirmed to have just one currency at launch, and will not restrict access to in-game content with premium currencies or timed events.

Jeremy Collins, Warcraft Arclight Rumble art director, told PocketGamer.biz: “We’re trying to keep monetisation pretty open during the beta, and experiment with many things, and with fairness one of our tentpost pillars, we decided to have only one currency in the game.

“It’s purchasable and acquired through playing the game itself, and we’re not including any randomisation: players will know that what they buying is what they’ll get. We felt this was the strongest way for us to make sure it was a fun and fair experience for everybody.”

Andy Lim, Blizzard senior engineer, added: “Having one currency is our way of putting our stamp on what we’re calling a player-first business model. We want to focus on doing right by the players and how they want to spend their money.

Although in-game items and cosmetics are frequently accessible through exclusive IAPs or timed in-game events, Collins was nonchalantly frank about the ability to unlock all content through in-game currency: “It’s a very easy breakdown. You can play the game and gain every mini right now. Paying is not necessary for unlocking any mini at all.”

Lim added: “It’s something we want to test further in the beta, and see how it pans out in the months ahead.”

Warcraft Arclight Rumble will be available on iOS and Google Play, and will enter closed beta in the future within specific regions. You can read more about the Arclight Rumble announcement here, as well as how the team translated the Warcraft aesthetic for the mobile audience.