A new report by Newzoo breaks down key developments in the metaverse and blockchain and NFT application, and the 500+ parties building the metaverse 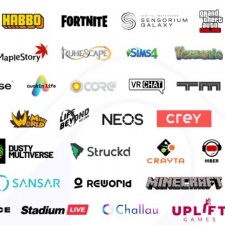 A report by Newzoo explores 10 key trends in the metaverse, blockchain, and NFT spaces – both the potential and barriers the spaces face as they grow to have a larger impact on consumer’s day-to-day lives – lists some of the 500 companies competing to build the metaverse, and how companies can utilize them to further connect with consumers and appeal to both new and existing customers.

Consumers have been spending increasing amounts of time in virtual worlds, and the report suggests that a metaverse presence will become more and more essential for brands hoping to engage with consumers.

In the future, this increase will see an escalating demand for digital identity and representation, as a consumer’s avatar will be their primary means of interaction within the metaverse. This suggests that businesses that offer real-world items can adopt a direct-to-avatar business model, offering items such as apparel and skins exclusively for our avatars.

This has important implications not just for the future of the metaverse, but for e-commerce as a whole, and brands are getting involved. In December 2021, Nike acquired RKFKT Studios, a digital fashion firm that makes sneakers, while digital fashion house Auroboros debuted its first digital, ready-to-wear fashion line at London Fashion Week.

The past year has seen a notable upswing in metaverse use, with major brands from a variety of areas – such as Adidas, Gucci, and Samsung- investing in digital real estate within the metaverse, hoping to appeal to both new and existing customers.

While this is essentially betting on the continued success of the metaverse, the investment is also seen as a low-risk way for brands to ensure they’re visible to customers should the metaverse become more prevalent in the future.

However, there are some notable barriers for the metaverse. It’s likely that different governments will want to regulate the virtual world, which could prevent interaction between worlds, with China’s recent ban of Animal Crossing: New Horizons following an in-game demonstration regarding Hong Kong being cited as an example.

The need for strong safety and content moderation supported my machine learning could impose a problem in the space, and the report stresses that the space would require radical IP and copyright management modernizations to account for any new situations that could arise through the use of the space for content creation.

The metaverse could also raise privacy and ethical concerns, as the metaverse’s activity-tracking has the potential to be far more powerful than web-tracking.

The metaverse could also raise privacy and ethical concerns, as the metaverse’s activity-tracking has the potential to be far more powerful than web-tracking

There are also concerns regarding accessibility and scale, with the report stating that new standards and protocols are needed.

The report states that, while NFTs and Blockchain gaming both experienced growth in 2021, the drawback in the crypto-market have led to a decrease in crypto valuation. As a result, many low-effort attempts for companies to create a presence for themselves within the metaverse are likely to fail. However, the report is optimistic about the future of the metaverse as a while.

One concern raised by the report is the large number of blockchain games “that feature rudimentary gameplay without sustainable economies”. However, the report does say this is natural, as “complex gaming experiences take time to develop.” The report states that, as time passes, more and more blockchain games will likely be able to compete with traditional AAA titles in terms of both player base and technical complexity.

The report also singles Ethereum out as the biggest name in the blockchain gaming space, combined with its sidechains and layer 2s, and is “poised to continue its role as the dominant smart contract platform.”

The full report can be read here.