What it is, where to find it and how to order - complete with full specification 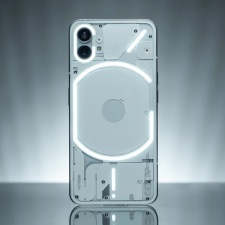 London technology company Nothing has today successfully launched its first smartphone, the Phone (1), bringing a welcome dash of fresh blood to a sector that some might say has become stale thanks to annual incremental updates from the big players like Apple and Samsung.

The 5G mid-range handset uses a Qualcomm Snapdragon 778G+ processor - custom modified by Qualcomm for Nothing - and comes with 8GB or 12GB RAM, plus either 128GB or 256GB storage. Promising 1 billion colours, the 6.55” OLED display features HDR10+ and a 120Hz refresh rate, all protected by Gorilla Glass 5, front and rear.

The Operating System is a modified version of Android 12, with Nothing stating that the Phone (1) offers, “No bloatware, just speed and a smooth user experience”. The phone does offer integrated support for third-party products, such as Tesla, as well as an in-built NFT app that allows the user to display their NFTs and track floor prices on the home screen.

“We designed Phone (1) as a product we'd be proud to share with friends and family,” said Nothing CEO and co-founder Carl Pei. “This simple principle helped us wander off the beaten path, tune into our instincts, and create an experience that hopefully marks the start of change in a stagnant industry.

“Lately it feels like, after a slew of more and more similar products, and more and more uninspiring products. At Nothing, we don’t believe so,” said Pei.

Work has been underway on Nothing’s phone for 18 months, with rumours circulating ahead of the design reveal at last month's Art Basel event. The company chose to 'leak' its own product, resulting in a significant amount of interest. The first 100 phones were engraved and auctioned off on StockX, raising over $100,000 in total, showing that there may be some evidence to back up the company’s hopes to shake up the industry. This money was invested into a community-managed fund.

New players in the hardware space are a rarity and while Apple's iPhone had a remarkably success launch, Steve Jobs was not keen to see the handset as part of the wider games industry. While the eventual impact on the games industry has been astronomical, it remains to be seen whether the Nothing Phone (1) will chime with consumers in the same way.

The phone begins shipping today in regions such as the UK, Australia, and India, but is not yet available in the US. Prices start at £399, up to £499. The Nothing Phone (1) is available to order now via the official website, Amazon, the network of retail partner stores, or the O2 network in the UK.

The Nothing Phone (1) reviews round-up – a "near perfect", potential "iPhone killer"