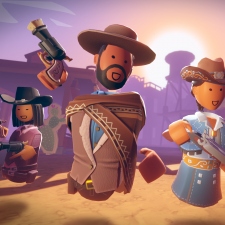 In Showdown, players board the Rec Express and journey to Sarsaparilla Springs, a ghost town that has been transformed into a rootin’ tootin’ battlefield. Once they arrive, these trailblazers can boot up in new western outfits and assemble a team to duke it out in 3v3 cork-loaded shootouts for coveted rewards.

In the coming months, players will be invited to showcase their PvP creations in the PvP Game Jam, where they can experiment with new techniques and learn from the community. Additionally, Rec Room invites its community to share their Showdown experiences in the Showdown video contest.

“When we set out to make a Rec Room Original, we’re always looking for new ways to expand what’s possible for players and creators in Rec Room,” said Rec Room co-founder and assistant creative director, Josh Wehrly. "Originals not only give us the opportunity to deliver rad new games, but also drive creation in Rec Room forward by releasing the tools that power these games to the creative community.”

Rec Room celebrated six years in the industry this year, claiming to have more rooms in its metaverse than there are apps in the Apple Apps Store.