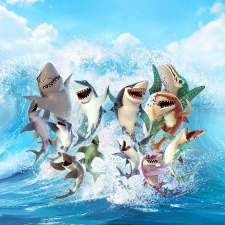 Ubisoft have announced that its sleeper Hungry Sharks franchise had accrued over 1bn lifetime downloads, making it Ubisoft’s most-downloaded mobile franchise so far.

Hungry Sharks has been a quiet hit, but as we covered back in 2016, a consistent one. Managing Director of Ubisoft Future Games of London, Ian Harper, spoke on the announcement “We’re really proud to reach this incredible milestone and I’d like to thank the teams involved for their hard work as we look ahead to some exciting announcements in early 2023 on the future direction of the studio and to share more on Hungry Shark brand.”

Just when you thought it was safe to go back in the water...

The Hungry Sharks franchise, although it may not be as well-known as massive mobile success stories like Clash of Clans and Angry Birds, is clearly doing something right having reached these sort of numbers. It points to how, even without major public visibility, a mobile title can still achieve success, however it also points further to the fact that Ubisoft may be better off turning their eye towards mobile more. To have as vast a catalogue of IP’s as they do, and having their most successful be an acquisition means there’s a vast untapped potential wellspring of inspiration and resources to use in the mobile gaming space.

Given evidence that Ubisoft’s mobile wing will be crucial to their continued success, this announcement is likely going to prove to be both a benefit and a wakeup call. Given that major gaming giants like Activision-Blizzard and Take-Two Interactive have seen their revenue share become mobile first for the first time ever, mobile gaming is set to become an unignorable facet of planning, developing and publishing in the gaming industry.