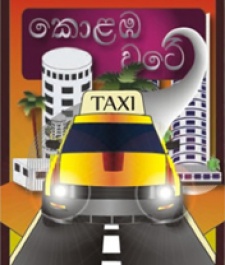 August 4th, 2008 - 11:48am
By Stuart Dredge, Contributing Editor
Talking about ad-funded location-based mobile games might sound like one of those futuregazing sessions you get at trade shows, but it's actually something that's happening in Sri Lanka this week.

It's based on a taxi in Sri Lankan city Colombo, with players earning money as a taxi driver  complete with 'voice' guidance in Sinhalese, which is spoken by more than 19 million people in the country.

The interesting part is the fact that the in-game map is based closely on Colombo's real-world streets, with plans to sell advertising within the game to firms keen to brand particular areas of the virtual city.
Colombo Ride will be released this Friday for free on the Games Sri Lanka portal, available to download for players outside Sri Lanka, too.

In-game advertising (as opposed to ads before and after a game is played) hasn't really taken off on mobile, so it'll be interesting to see how this effort goes.