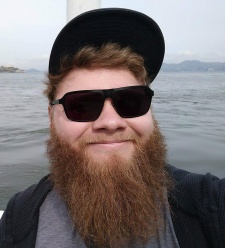 Juuso Mattila is game art lead at Wargaming Helsinki. At Pocket Gamer Connects Helsinki on September 11th to 12th he'll be talking about how to build 100 tanks with about three people. The talk goes through the tools and pipeline developed to make this possible, from concept to animated in-game models.

Juuso got his first games job offer at 22, immediately dropped out of university and he's been making games since.

His first job was as a programmer but he quickly realised he wanted to live a simpler life so started 3D modelling instead.

He's worked for a whole bunch of small game companies as a freelancer, and made some games of his own before joining Wargaming a year and a half ago to see what working in a big company is like.

Juuso Mattila: Besides regular art lead stuff, a lot of my time goes into technical art: building pipelines and figuring out workflows to make artists' lives a little easier, as well as writing shaders, optimising graphical performance and making special effects for our games.

Seeing versions of games like PUBG and Fortnite on mobile is really interesting, both from a technical and design standpoint. Technically it's pretty cool that those games can run on a phone now, and they look really, really nice.

Also, bringing such 1:1 experiences from desktop to mobile goes against how a lot of studios think about phone games. It's gonna be interesting to see if companies can make an original IP with the same type of controls and gameplay.

At least in Helsinki, the current employment situation is great! People seem to be finding game jobs quite nicely, and the barrier to entry isn't as steep as it once was. It also puts pressure on companies to build good reputations and treat employees right in order to get the best people.

I'm not a game design prophet so I'll stick to graphical things: I think mobile games are gonna keep looking better and better, and it's gonna happen fast.

If you think about it, the Nintendo Switch is a good place to look: it has hardware in it that's essentially phone hardware, and it has some fantastic looking game coming out all the time.

For mostly battery consumption reasons, you can't harness quite the same levels of power from a phone as you can a console yet, but it's a good indication of things to come!

I've never been before, so just looking forward to seeing what it's about! I always try to look for the nerdiest, most technical talks possible.