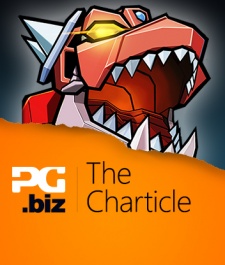 Australian developer Halfbrick has a history of taking a simple concept and turning it into an ultra-addictive game.

Critics appear to agree that the Fruit Ninja, and Jetpack Joyride studio has once again nailed the formula with Colossatron: Massive World Threat,

but has the game managed to convince others of its worth, and, more importantly, perform well where it matters?

Unfortunately for Halfbrick, Colossatron - which is priced at $0.99, but also offers IAPs - hasn't been attracting the same amount of attention as some of its predecessors.

However, it seems that the game simply couldn't gain any serious momentum in many of the western markets.

Making matters worse is the fact that the title's hybrid monetisation model hasn't exactly been firing on all cylinders, either, with its performance in the grossing charts painting a distinctly lacklustre picture.

Colossatron's performance on the iPhone paid download chart in the US - via App Annie.

Colossatron only managed to peak at #22 in the US iPhone downloads chart at launch, and since then has fallen further down the pecking order - currently around the 200 position.

Colossatron's top grossing performance on the US iPhone chart - via App Annie.

The US top grossing chart doesn't make for particularly good reading either, with the game peaking at #232 a day after launch, before again slipping away, and eventually falling out of the top 500.

The iPhone download charts in Europe do, however, hold slightly better news.

At launch, Colossatron managed to maintain its position in the top 100 for almost a week, and in countries such as Italy, Spain, and France, the game cemented its place in the top 100 until early January, peaking at #8 in Italy.

Once again, Colossatron didn't cause any real damage in the top grossing iPhone charts, though, with the game failing to break into the top 100 in any of the big European markets apart from Italy, where it peaked at #93.

Surprisingly, though, the game's performance in Asia looks more promising than it does in the west. In key markets such as China, Japan, and South Korea, Colossatron has been turning a few heads.

Colossatron's performance on the iPhone download chart in China, South Korea and Japan - via App Annie.

In terms of iPhone downloads, Colossatron has been performing well in all three countries, however it's in China, and particularly South Korea, that the title has received the warmest reception.

In both of those areas it has been a constant presence in the top 10, and the top 25, even managing to nab the #1 spot in South Korea for three consecutive days towards the back-end of December.

Yet glancing at the iPhone top grossing charts for Asia reveals that Colossatron hasn't exactly been rocking the boat in the east when it comes to cold hard cash.

Perhaps, this shouldn't be too much of a surprise as paid games with in-app purchases rarely monetise as well as free-to-play games. Also Halfbrick has a reputation for its light touch when it comes to IAP.

Still, it will need to ensure it has a good cycle of updates ready for release to ensure it can keep the game's momentum - as it is - as solid as possible.