Experience Breath of the Wild in full through virtual reality 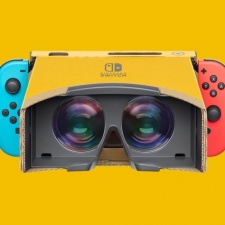 Nintendo has revealed that virtual reality support for Super Mario Odyssey and The Legend of Zelda: Breath of the Wild be coming to Nintendo Labo in April.

The new feature will be rolled out in a software update allowing players to experience both games through the Toy-Con VR Goggles.

Owners of Breath of the Wild will be able to play the entirety of the game through the peripheral, however with no head strap attachment this may prove difficult.

On the other hand, Mario Odyssey will give users three bite-sized bonus experiences set in the Cap, Seaside and Luncheon Kingdom.

With Nintendo now giving the go-ahead for VR to be incorporated into its biggest properties, it will be interesting to see if the firm considers merging the technology with other franchises due out this year, such as Pokemon and Animal Crossing.

Mario and Zelda VR support will be available to download from April 25th.

VR support for Nintendo’s biggest IP has been heavily fan-requested ever since the unveiling of the new Toy-Con at the beginning of March.