Pre-registration available across iOS and Android 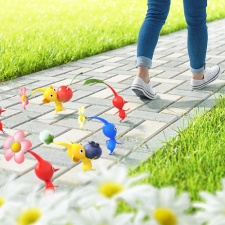 As confirmed by the San Francisco-based developer, the new title designed around the "theme of making walking fun" will now be available to play in the region, as the game prepares for its full release sometime in 2021.

Details surrounding "Pikmin App" (as it's tentatively being called) are being kept quiet by both Nintendo and Niantic - with only confirmation of the game's existence being announced last week - however, now some information of what the experience may entail has begun making its way online.

The first details shared by Elias Chew (via Twitter) revealed that the game utilises Google Fit to keep track of the player's step count and that the game currently displays a confidentiality notice for anyone that's gain access.

Following this, a bulk load of gameplay details were revealed by outlet VGC stating that players are given an item bag with Pikmin Seedlings that grow by absorbing Step Energy through walking. Pikmin can then be plucked once a certain amount of energy has been achieved.

Similar to the original 2002 GameCube outing, different types of Pikmin will be available to collect with each possessing its own element resistance or special ability. Those confirmed for the newest instalment include: Red Pikmin, Blue Pikmin, Yellow Pikmin, Purple Pikmin, White Pikmin Winged Pikmin and Rock Pikmin.

Decor Pikmin, a new type of species was also discovered in-game. These creatures will wear clothing that is most associated with the area they are found. Additionally, it seems as if players will encounter Seedlings as they travel and pick up items, as per the console counterpart.

VGC further noted that outside of exploring an Expeditions mode will feature, where players will send Pikmin to collect Seedlings or items previously discovered when out walking. A Lifelog will also keep a record of all user activities to encourage daily play.

No mention of the original protagonist, Captain Olimar, was shared.

Niantic PR confirmed to PocketGamer.biz that Pikmin AR is currently available to access on both iOS and Android devices for those in Singapore, although the firm could not comment on whether the game would roll out to other countries ahead of launch.

Anyone interested in participating in the testing phase can pre-register for the opportunity.

We're excited to announce that, in partnership with @Nintendo, we've begun testing our Pikmin-based mobile app in Singapore! Register now to participate in this all-new Pikmin walking experience. https://t.co/mdA6zRTAgj

Niantic recently revealed that the company has banned more than five million players across Pokémon GO, Harry Potter: Wizards Unite and Ingress throughout the entirety of 2020.

We previously spoke with Niantic senior game designer Matt Ein regarding the four-year anniversary of Pokémon GO and how the company looks to support the game for years to come.