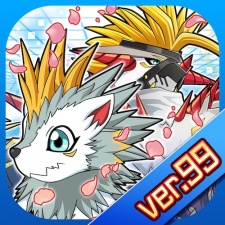 Bandai Namco has revealed that it is shutting down services for its mobile RPG Digimon ReArise on April 21, 2022.

Digimon ReArise first launched in Japan in 2018, followed by a worldwide release in October 2019 on iOS and Android.

The developers have stated that the sale of DigiRuby, the in-game currency, will cease from today (February 21). However, any currently purchased currency can still be used in the game.

Digimon ReArise is an RPG that centres around boosting friendships with Digimon in Digi-Town, with more Digimon added to the game since launch.

Bandai Namco released a statement to players on its official website for the game, as below:

"We regret to announce the closure of DigimonReArise [sic]. Thank you all for your support and we hope you enjoyed playing. We will be keeping the servers open until 12:00 JST Apr 21, 2022, so please continue to enjoy DigimonReArise until the very end.

"All items can be used until the last day, so if you have any items or DigiRuby in your account, please use them before Apr 21, 2022. Also, from today, we are disabling the purchase of DigiRuby."