VR Mavens on the most significant news of 2015 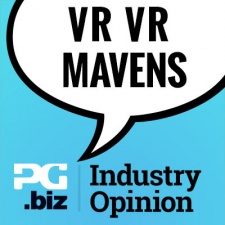 2015 could be described as the Year of the Phoney War when it comes to virtual reality.

Lots was promised but aside from Google's Cardboard and Samsung (and Oculus') Gear VR, there wasn't much in the way of concrete activity.

So with that in mind, we asked our VR Mavens:

Well, March 1, 2015... HTC Vive was announced and Steam was joining in on the game. That was pretty big news!

All of the three upcoming main VR platforms are converging.

In my opinion, it was the announcements regarding positional input.

Now have a clearer picture of what the upper tier VR experience is going to be like.

Also, as a developer it's pretty important to know that all of the three upcoming main VR platforms (Sony, Oculus, and HTC) are converging into similar solutions, all of them using handheld position tracked controllers.

I would have to go with the official announcement of the Oculus CV1.

Everyone in the dev community knew it was coming but it formalised a pipe-dream for a lot of VR enthusiasts and tech fans, showing that companies were willing to commit to making VR for the masses.

The Oculus Touch announcement was significant as it was an additional way to explore the virtual environment that makes the VR experience more involved.

I think this is a step change (hand change) in VR and we will we some really interesting content in games and non games using this technology.

I think the most significant thing in 2015 has been the acceptance that VR is here to stay and the naysayers have gone very quiet.

The realisation of tracked controls in VR is huge.

The realisation of tracked controls in VR is huge, whether that’s Oculus Touch, Vive controllers or PlayStation Move.

These devices really improve your sense of immersion in VR and open up incredible possibilities for developers, we’re enjoying working with them and can’t wait to see what fellow developers produce.

In addition, now that it’s launched I think the Gear VR should get a mention too. It’s an incredible piece of kit capable of delivering a great VR experience.

I hope it gets traction with the general public as we’re starting to see great games on there.

Having worked on AR and PSMove for a couple of years before VR, I guess I believed people were already aware of how much sense of presence and immersion you get from just having your hands in the game.. clearly wasn't the case!

Rather than it being a 2015 bit of news - for me it was more like 'In 2015, others caught up with what Sony were doing with hand presence".

The Vive announcement was the biggest news for me; the Valve and HTC-made device is a very worthy addition to the high-end VR market, and room-scale VR with hand presence was a game-changer.

While using the full space the Vive is capable of working within is something only a certain section of consumers will do, the accessibility of such incredible immersive tech, for both developers and consumers, is something we've never had before.

I agree with Paul that it's a tie with the Vive announcement and the Gear VR consumer launch.

For devs, the Vive announcement and release of the dev kit was the biggest news. It's fantastic to have a full VR dev kit with proper VR input, room scale, and rock solid 6dof tracking.

It's also good that Oculus has strong competition and not be the only game in town for high end VR and to have them push each other. It also allows devs to think about interactivity and VR for unlocking creativity and productivity. I just wish more devs had access to the kits, even the newly announced 7,000 just isn't enough.

For consumers, the Gear VR consumer launch was the biggest news. The $99 price point and the large amount of content options with the launch makes it really compeling to consumers.

You can see that VR evangelism is going to go mainstream.

The biggest thing is that this will be the proper way to market and advertise VR which is one of VR's biggest challenges. There were so many people posting pictures of first time VR users in Gear VR at holiday get-togethers that you can see that VR evangelism is going to go mainstream.

And I did spend a lot of time working on gesture based interaction and I always thought this mismatch of 3d input with a 2d display was a big limiting factor. Now with the proper 3d display that is VR, gesture based systems are much more intuitive and in fact a necesity.

Echoing Tipatat's view, in 2015 it was established that we are actually looking at two variations of VR - mobile and HD.

The Vive and PSVR news established the soon to be high end market of VR platformes.

How is Oculus Rift shaping up compared to Morpheus and Vive?

How do virtual reality's unique challenges affect how developers make and support games?

Is the success of Google Cardboard good or bad for the future of VR?