Why three-man-indie Framebunker is going iOS, paid and niche core 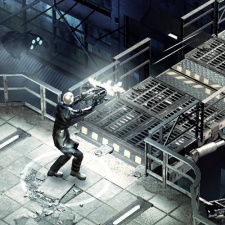 Now set up in Copenhagen under the name framebunker, they have been working on the tactical cyberpunk shooter Static Sky for more than two years.

I caught up with them in Amsterdam at Unite Europe 2015 to see how things were going.

Static Sky is an iOS-only game at this point. It's also a premium game, and a very visually impressive one; it uses Unity, of course. I was curious to hear their take on it.

Was it a reaction against the most alienating excesses of free-to-play? Nicholas Francis, a man whose Twitter bio reads simply “if you're free-to-play, kill yourself”, seems like the right man to ask.

“I know a lot of developers are deeply frustrated by it,” he tells me.

“It just feels like, oh God, now the man wins again, right? You have to have God-knows-how-many millions to actually acquire users.”

Hinshaw agrees: “It seems that you see - especially when it's these egregious violations of players - you do see a vocal backlash against it, so maybe there's a bit of a counter-trend on the way.”

We're banking on the fact people who grew up playing games still play games on their iPhones.

“This is a niche game,” Francis continues. “We're going for older people, and we're banking on the fact that people who grew up playing games still play games on their iPhones today.”

“So it's not going to be something that reaches the broad masses, which also means that all the free-to-play mechanics just don't work, because that requires you have God-knows-how-many million players up-front just so you can milk the 1 percent of those actually willing to pay.”

The pair discuss dabbling with the idea of “somewhere in-between” premium and free-to-play, but eventually concluding that it was also not a viable option. It is also suggested that gamers will never perceive a product in the same way if it features microtransactions, even if they're innocent.

“It's interesting, because I played Infinity Blade before they added any in-app purchase mechanics. And then they added them, and I totally didn't mind,” says Francis.

“For a while I was advocating that approach, but then [he turns to Hinshaw] you started playing later, after they'd added the in-app purchases, and you said 'this is just another pay-to-win game'. Which shows that it depends a lot on your perspective, your initial view.”

“For example, I'm an avid Dark Souls player... and it's super, brutally difficult. If that had in-app purchases, every time they killed me I would have said 'Oh, those bastards, they're just trying to get me to pay the money.' As they don't, I just think this is meant to be a hard game.”

“So it could be exactly the same game, but just the addition of that would make my interpretation of it completely different. So that's sort of why we just said 'okay, this is a premium title, it's core gameplay.'”

Hardcore gamers - or those wanting premium experiences - have not given up on mobile, Francis states.

Gamers will never perceive a product in the same way if it features microtransactions.

“You've got something like X-COM on iPad, and that did quite well. You have Monument Valley... so people are doing it. I'm not seeing quite enough people doing it to say it's a trend rather than that some people got lucky, but somewhere in between the two, I think.”

“Even if you've been burned on [mobile gaming]... you may be resenting every moment of it, but that's what you're playing, that's what you have, it's with you all the time.”

Considering the pair's history at Unity - Francis was a co-founder - I was curious how it felt for them to be back at a big Unity gathering like Unite Europe.

“They talk about the 10-year anniversary of Unity, but for me it's 12 years,” says Francis.

“On some level I'm just a proud parent now, and my child has to go out and make its own life choices. And now I'm just watching from the sidelines.”

How does he feel about the new direction and focuses, as shown off at the keynote?

“I'm personally not interested in the ad stuff because that's just not the kind of games I want to be making, but if some people want to make those games power to them. There's a problem to be solved there, and I think it makes sense to try and solve it.”

“As a creator, maybe as an old-school creator, I sort of like the idea of making something finished and then tying a knot on it.”

Hinshaw interjects: “Well, look at Unity. That's probably the biggest thing you've created and it never got a knot tied on it.”

“But then I think there's something different between a game and a professional tool in that regard, because I see the game as being more like a creative endeavour,” counters Francis.

“But it's very dependent, and some games lend themselves to [GaaS] better than others,”

There are some fairly significant complications with developing high-end games for mobile platforms, including high-development costs and compatibility challenges - are these a concern for Francis and Hinshaw?

"The third guy is a graphic artist, an old demo scener, and before us he was at Io Interactive working on [Hitman] Absolution,” Francis explains, “and we're very frugal, so we don't have high costs.”

“And we're focusing on iOS first, where there's not nearly the same fragmentation,” Hinshaw continues.

“But if there weren't fragmentation, then of course we'd be doing Android as well,” comments Francis. “So in some way you could say that we are concerned.”

“But yeah, of course it concerns me if I have to get this game running - and especially looking good - across a gazillion different Android devices.”

However, opting to cross that bridge when they come to it, the iOS version of Static Sky could be out as soon as December - and the appeal of a pre-Christmas launch is twofold.

“Loads of new devices, and they're all hitting the App Store to find a game,” says Francis.

“I mean, it's nowhere near console where if you don't make Christmas you wait another year. But there's a slight advantage to hitting Christmas if we can.”

“Also, if we could actually ship it the week before Christmas, it means we get to have Christmas. That would be really nice - an interesting change.”