The power of many titles 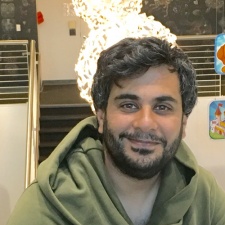 US casual developer Storm8 started 2015 with the announcement that its portfolio of mobile games had racked up 1 billion downloads.

And during the year, it's continued to keep its foot on the accelerator, noticably with a long term licensing deal with Hasbro.

It's also keep its original IP fresh, launching new titles as well as sequels such as Bakery Story 2.

To keep that monentum going, it's recently hired ex-Rovio and Halfbrick developer Ramine Darabiha, who has taken the job title Lead Product Manager.

It's a good opportunity, then, to find out why he joined Storm8 and where the company will be going in 2016.

PocketGamer.biz: Given that you'd previously worked at companies such as Rovio and Halfbrick, what attracted you to California and Storm8?

Ramine Darabiha: I've been in the industry for more than eight years. I started by writing reviews and analysis. At Rovio and Halfbrick, I had the privilege to work on three of the most downloaded games on mobile at that time (Angry Birds, Fruit Ninja and Angry Birds Rio).

That being said, I'm sure you've heard the saying that gaming is a hit driven business. In mobile, we've seen hits come and go. In that light, Storm8 has managed to build a sustainable gaming business.

Today, we have a portfolio of 45+ live games with more than 1 billion downloads. This means that we don't need to rely on a single game or genre to succeed. If you think of your company as one that delivers gaming services in a rapidly changing market, you want this kind of diversification.

In the past, I've learned the craft of making a really compelling, juicy experience that appeals to a mass audience. What was missing was the operational excellence in F2P.

I believe that there is a lot to be learned from a studio that can run an entire network of products. Storm8 is building a game network that can give all kinds of players what they want.

There is a lot to be learned from a studio that can run an entire network of products.

The team has really mastered the art of games-as-a-service, and I'm really excited to help build on the success of our network.

Can you explain about what your day-to-day role as lead product manager and what are your
longterm plans for Storm8's games?

I'm working on our casual games, such as Candy Blast Mania and Jewel Mania.

There are many Product Managers in our team, so I work on many different projects. I recently worked on Candy Blast Mania's second year anniversary update, which gave our players free rewards.

I am also involved in expanding our social presence and social features, in addition to helping generate new
ideas and improving some of our features' UX.

As you can see from our releases, like Hungry Babies Mania or Bakery Story 2, we keep raising the quality bar of our games.

You can expect more in terms of social functionality as well. Given our wide portfolio of games though, I'm looking forward to touching other genres in the future.

What are the big trends in mobile game design?

One trend we're seeing in the West is continued growth, with an ever increased focus on raising the quality bar for games.

This is mainly driven by the overall quality required to get on top of the App Store charts, increasing customer expectations, as well as beefier devices such as the iPad Pro.

On the other hand, the rapid growth of emerging markets such as India, Brazil, China, and others, is opening the door to a lot of new opportunities.

The games that will succeed in these markets will need to be able to run on humble hardware and with limited bandwidth, and be either culturalized and distributed well locally or be globally appealing. All of this, without compromising on quality. It might sound challenging but I actually think it sounds a lot like mobile in the early 2000's.

Last, as supply of great games keeps increasing, I see the value of brands also increasing. Standing out is going to be very important for organic growth, however, branded IP can only be as good as the game itself; it's never a substitute for a great game. It'll be interesting to see how this pans out.

At Storm8, we remain focused on building our network, which is driven by the high quality games that we create for our players.

While Storm8 is best known for its social casual and casino games, it has released more action oriented games in the past. What do you think is the right genre mix for the company in 2016?

We've reached over a billion downloads of our games. It goes without saying that we're going to keep doing our best to serve our player base.

For 2016, we'll continue to raise the bar in our core categories, including social casual and casino games. We have a good mix of genres that really resonates with a broad audience, so there's a lot of room for growth.

iOS has been a key platform for us, but with Android growth ... we need to be equally strong there.

The mobile games market is becoming more global, but equally, different countries have specific tastes. What do you think is the best way to overcome this challenge and make the most of the global market?

Technologies and types of devices that players use worldwide vary significantly, so in order to reach them, it's important to be able to accommodate and run on as many devices as possible.

iOS has been a key platform for us, but with Android growth, especially in developing nations, this means that we need to be equally strong there.

Also, culturalization of games is crucial. The games that a commuter in Tokyo enjoys are very different from a teenager in India.

It's not just about making your game easy to translate. You need games that are built on cultural notions that are relatable and gameplay patterns that can fit the lifestyle of different players.

As I mentioned earlier, bandwidth and device issues in developing nations should also be taken into account as gameplay experiences on a highend device would be very different from a lowlevel device.

I think most importantly, the focus on fast iteration has never been more important. If you're going to cater to many different tastes, you're going to need a very dependable content pipeline and a nimble team to execute.

Storm8 has recently released Bakery Story 2, and we've seen Angry Birds 2, so what's your view on sequels in the world of games-as-a-service?

That's an excellent question. On one hand, operating your game as a service implies that you need to keep improving your game and deliver new content; there is a very extended product life cycle. So unlike a traditional game, you won't need a sequel to introduce new features.

Sequels make sense if there's something new that you're adding to a game.

On the other hand, I think sequels make sense if there's something new that you're adding to a game or franchise that you couldn't achieve in the previous version.

For instance in Bakery Story 2, yes, the player goals are similar that is to cook and manage your own bakery but the experience and presentation are drastically different.

The game is not only visually completely revamped, but its gameplay is also different. It makes sense for this game to be a sequel because changing the core experience of existing players would have been risky, but delivering a game with a different experience makes sense.

Another value I see in sequels is name recognition. Players are already familiar with your game or brand, which makes it slightly easier to market than if you're starting from scratch.

Is there still a place for original IP to hit it big?

More than ever! As I pointed out, supply is growing. This means that we're seeing an increase in sequels, branded games as well as original IPs.

I think that originality will still help games stand out. A great example of this are Crossy Road and Pac Mac 256 [both developed by Australian indie Hipster Whale].

While the former didn't have the backing of a giant publisher, it has performed significantly better in terms of downloads. This is also valid for the top grossing games: if you look at the top 10 today, often 80% are still based on original IP.

Working with celebrities and known brands is a great way to get initial buzz and help with discovery of your game, but what wins in the end are great gaming experiences and games that surface new content on an ongoing basis that players love for years and years.

Finally, what have been your most played mobile games of 2015?

I've really enjoyed Pac Man 256. It's a great modern take on an arcade classic. I think the infinite game board and the power ups really help make the game more replayable, and I love the work that was done one the shaders to make it feel like you're playing on an 80s CRT screen.

I've been playing a great deal of Hungry Babies Mania, too. It's one of the most polished Match 3 games on the market, with more emphasis on characters and more obstacles than I've seen in other games.

Last, I played a lot of Tap Titans. I personally think that a good game is one that delivers a lot of emotional feedback for very little input. In that sense, clicker games are amazing.

I got a little addicted and actually beat the game. As in, I reached a point where the numbers simply said "Infinity Coins" and "Infinity Damage".