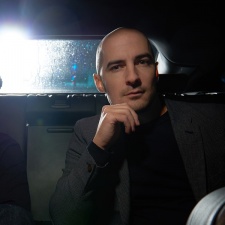 Late Shift is no ordinary mobile game. But then this interactive mystery launched from no ordinary game studio.

The Switzerland-based CtrlMovie team were an agency working on promotional experiences. They only later realised they'd built a platform that would be great for telling entertaining full-length narratives.

"That was a big deal and greatly satisfying for us!" admits Baptiste Planche, CEO. "It's fantastic that our hybrid experience gets accepted and acclaimed by the gaming community."

They walked away with trophies for Best Mobile/Tablet Game and Most Creative & Original Game. Not bad for something that still hasn't registered on many gamers' radar.

Baptiste Planche and Tobias Weber started the company in 2014.

"We created innovative content for branded entertainment. This allowed us to build on an existing in-house team when we started to develop the concept and first pilot projects for CtrlMovie."

CtrlMovie is a patented platform for "Choose Your Own Adventure"-style movies that play on your phone. And the company plans to licence it. Their own debut film using this tech is Late Shift, a crime thriller. It's the story of a student, Matt, who must prove his innocence after crooks pressure him into helping burgle a London auction house.

You make decisions on behalf of Matt and the consequences unfold on screen without a noticeable gap or edit. Although it has one complete story, Late Shift has 180 decision points and seven different endings.

The CtrlMovie team filmed over four hours of film, of which you might see half in one run through.

Taking decisions through the touchable interface is very intuitive and doesn't interfere with being immersed in the movie.

There's a much-loved heritage of branching narrative and interactive fiction: gamebooks were a phenomenon way back. But it feels like this particular form of visual storytelling required mobile phone technology to reach a certain point.

"That's exactly the way we see it," says Planche. "In fact, we started seriously playing around with the concept when the first mobile phones gained sufficient computing power to do what we wanted.

"Taking decisions through the touchable interface is very intuitive and doesn't interfere with being immersed in the movie."

He continues: "Our vision has always been to create a new cinematic experience based on multi-branched narratives, in which the audience or the user can decide for the story's hero. 'Cinematic' is an important keyword for us.

"We don't want the movie to be interrupted or less appealing in any way just because we made it interactive. People seem to appreciate that. They enjoy the quality of this new experience between film and game."

In addition to branching choices, in some scenes you can swipe to change the viewpoint which might reveal new details. But you're still watching a feature-length, theatre-quality movie.

There is a danger here that Late Shift could fail because neither film watchers nor gamers embrace it. Interactive fiction is an overused term, but what market is CtrlMovie targeting?

"We're aiming at both equally as we believe we're talking about the same people here," says Planche.

"Maybe not the hardcore gamers or the highbrow art-house film aficionado! But the huge segment in between those two groups who love films and games equally. They're open to new and convergent experiences, disrupting the established formats a little bit.

We don't want the movie to be interrupted or less appealing in any way just because we made it interactive.

"This being said, it's clear that the two markets function in different ways and it's a challenge to explain to the crowds appropriately what CtrlMovie is about."

Show Me The Money

Most of the capital with which CtrlMovie operates was raised through private investors' money with input from Swiss and UK arts initiatives.

"We've set everything up in a start-up spirit," continues Planche.

"The money we've raised so far has allowed us to develop the whole CtrlMovie technology and it contributed to two-thirds of the financing of Late Shift. The other third was contributed by Swiss National TV SRG SSR, the UK Tax Credit and the #SwissGames initiative by the Swiss Arts Council Pro Helvetia.

"The Swiss government didn't support us: unfortunately we couldn't convince the federal film fund of the potential of our innovative concept."

They monetise Late Shift by splitting the narrative into 13 episodes, giving you the first for free and charging through an IAP for the rest. The first "chapter" enables you to get a sense of the experience, then one IAP gets you the whole remaining story.

A built-in download manager means you can download it one chapter at a time if space on your device is an issue. You can delete previously-watched episodes without losing your progress to that point. Once you've bought them, you're able to view all episodes again and again to discover the various paths through the adventure.

It's still early days in terms of getting this into people's hands.

"We definitely have much more potential in terms of mobile downloads than we've achieved so far," confesses Baptiste Planche.

"We haven't invested any money in advertising or user acquisition so far. But the ones who tested Late Shift love it and talk about it. We're now looking into promoting it more seriously in 2017 and we hope to gain many more fans around the world.

Everything is already in place for filmmakers to make their own interactive movies based on our technology.

"We're also intending to go to additional platforms, such as consoles and PC."

And there's always that planned business model: licensing the technology to other studios.

"Everything is already in place for filmmakers to make their own interactive movies based on our technology," he tells us.

"They can use our authoring software CtrlEdit, which allows you to publish content on a whole range of platforms. And the good news is that we don't expect any upfront licensing fee for it but we'll participate with a fair share of the revenues."

And there are other opportunities ahead. The next step for CtrlMovie is bringing Late Shift into cinema screenings. Audience members will use their phones to vote on the story choices being projected onto the big screen.

"We started our journey with a clear focus on these devices, but now we've made it possible for branching narratives to work even for home entertainment and in movie theatres," explains Planche, referencing the "participative event-cinema experience" potential of a room full of cinephiles with mobile phones.

"The audience has to download a voting app before the screening and once they're in the movie theatre, they have to connect to a local wi-fi. Then the whole audience takes decisions and whatever the majority votes for, influences the storyline.

"It's such a great experience to see how people cheer and protest to see 'their' story happen. They are in charge of the story's hero. And if they don't like the ending, they'll come to the movie theatre again or download the app in order to do better."

As with the mobile version of the Late Shift, if the audience chooses not to vote or fails to reach a clear decision, the movie progresses along a default path so the transitions are seamless.

"We think it's only the beginning and we're looking forward to trying out many more things," adds Planche. Late Shift is a crime thriller but Planche and his team can see other filmmakers taking the technology into new areas: "Think of a romantic comedy or a horror or zombie flick".

And let's not forget game makers: "We'd also like to test more game-like content, with a higher intensity of interactive features. And why not give the audience the choice for which character in the story to choose for? We have many more ideas but it will also be interesting to see with what others come up with."

You can download the interactive movie Late Shift to your phone or tablet from Apple's App Store now. The movie will be screened in selected cinemas, with the seated audience voting from their handheld devices, in early 2017. If you're a filmmaker who'd like to discuss using the CtrlEdit authoring software you can contact the CtrlMovie team here.