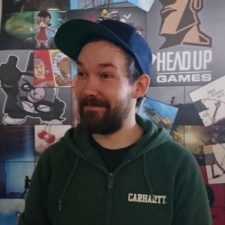 It's not entirely surprising that you may never have heard of Headup Games - the relatively small German publisher tends to deal with smaller developers and niche titles.

Its most famous series by far has been the weird and wonderful Bridge Constructor franchise, developed by Austrian outfit Clockstone and which found a home on mobile despite being a premium game.

Established in 2009 with just two developers signed up - one of which was Clockstone - Headup Games initially focused on PC games before shifting to premium mobile games in 2012 when the original Bridge Constructor took off.

"We're not a free-to-play company – we tried that once or twice, but it didn't really work out," says Headup game engineer Mark Aldrup.

"We noticed that we can't compete with King or the other big players in terms of marketing and so on, and we personally don't feel that free-to-play is a model that we can really work with.

"We don't think it's an evil thing to be free-to-play, that's fine, we just don't have the experience to do that, we're not monetisation experts."

The success of the original game also means that Clockstone is largely left to its own devices, as Headup trusts the team to create the best games it can.

When one Bridge Constructor is done, we're always thinking about what could be done next with the brand.

"On the creative side, we basically let them do what they do, because we know that they're doing well – we're giving feedback all the time and they're sending us builds once a week or so," he explains.

"We're not forcing decisions or forcing changes in the game, we give constructive feedback and basically let the developer do their stuff."

That said, Headup does go to its developers with ideas from time to time – which led to the development of Bridge Constructor Portal.

But Valve wasn't so easily persuaded to part with its IP.

"When one Bridge Constructor is done, we're always thinking about what could be done next with the brand," explains Aldrup.

"We had this idea that [Portal] would be a perfect fit, so then we tried to contact Valve to see if this was something they'd be into.

"It took two years or so to get the discussion going."

Thankfully, a new starter at Valve, who happened to be based in Berlin, took to the idea and encouraged the team to create a prototype video to show to the studio.

"We created a mock-up video where all the mechanics and graphics from Portal were in it and from then the discussions went pretty fast," says Aldrup.

Development on the game started in around February 2017, and it took about nine months before the game was ready to ship.

"The Bridge Constructor engine was already there – they had a stable foundation that they could build on," says Aldrup.

Bridge Constructor Portal was launched on December 20th for mobile and PC. Console versions were planned to release at the same time, including a Switch edition, but were ultimately pushed back into 2018.

We created a mock-up video where all the mechanics and graphics from Portal were in it and from then the discussions went pretty fast.

"With console versions, there are submission processes which take longer – it was the plan to launch everything in December, but we got into some trouble with submissions."

But the initial launch has gone well so far. Aldrup notes that "beside the first Bridge Constructor, it's by far the most successful title that we've done".

"It was fun to see how people react, because everyone was screaming, 'oh no, it's not Portal 3'. But I think people understood that it's not a Valve game and they really got the idea then."

As for Headup's plans for the future, the publisher is gearing up for the Bridge Constructor Portal launch on console and it has two new games signed and announced.

"We're working on a couple of other titles that we haven't announced yet and we're bringing some PC titles to console and mobile too," said Aldrup.

"[We've got] some older stuff coming to new platforms and some new titles. There's a lot going on – we're busy."