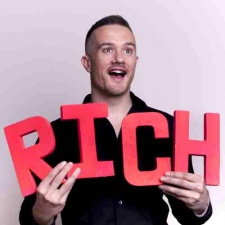 Richard Franke: I always knew that I wanted to be in a creative industry. Preferably a nerdy one.

I studied art and ceramics, but drew comic books in my spare time, as well as running several tabletop RPG games. The comic book portfolio got me a job at a games startup back in 1996 after my degree finished. Back then there wasn’t a formal way into the industry, so I was pretty lucky.

What attracted you to developing dating sim-style games?

When I started developing games independently I gave myself a brief to satisfy multiple criteria. I wanted to make a game:

Nobody had made what I considered a ‘warts and all’ true simulation of dating.

In answering these, a dating sim seemed like natural fit. Also, nobody had made what I considered a ‘warts and all’ true simulation of dating.

A lot of these criteria also made the game very YouTuber friendly (which was unintentional but taught us a lot).

I work from home, talking to my team on Slack, using Trello as a task management tool. I do all of my own social media, and customer service (with the help of my team) and I occasionally do guest appearances as Kitty at conferences and conventions to promote the game.

I also muck in doing some artwork, I do all my own VO and I make YouTube videos.

Learning to run a business and making sure we hit quality for the money we have. Being self-funded and published means that we are more flexible with time, but we do have to manage the expectations of our customers.

The biggest difference between mobile, Steam and console is the expectations of the community.

It’s a box-ticking and plate-spinning exercise - much like a game, but with more at stake!

How do you define "success"?

Happy customers and a happy and productive team, and having the money to carry on and live comfortably.

It’s still a viable market, if you approach it strategically. The biggest difference between mobile, Steam and console is the expectations of the community. They have to be handled in a way that satisfies them all.

Love Life is a lot more complex than Matchmaker. Where Matchmaker had a clear game loop where the characters would always go on a date at a restaurant with a fixed format, but interchangeable rounds like a game show, Love Life’s mini games are strung together using a true simulator, where the customers you choose and the locations you build determine the situations that will crop up.

Also the characters spend a longer time in the game, so that the player forms a more emotional bond with them. Kitty does a weekly inspection where the player gets paid for all the good deeds they’ve done that week. It’s all rather addictive!

To hopefully make enough money to make our next game, which we are already in pre-production on.

Try and keep your lifestyle healthy. Sleep and time to do other stuff are important.

I would probably make something a bit self-indulgent. A big sprawling fantasy epic with procedural narrative. But done in a Kitty Powers style. Sounds exciting, doesn’t it?!

Games are a drag: How Kitty Powers is glamming up the App Store