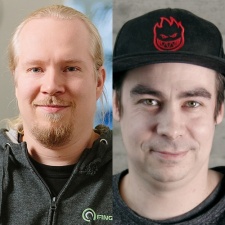 The Oulu studio isn’t quite as famous as its compatriots Supercell and Rovio, but it’s one of the biggest and most successful games studios in the country.

During the last couple of years it has moved into new digs, launched a publishing label called Round Zero, and generally supports the local development scene.

Speaking to PocketGamer.biz, Fingersoft CEO Teemu Närhi says there are a number of reasons for the success of Hill Climb Racing, which has fuelled the company’s growth.

“To skip the obvious part about having a well executed, mobile-friendly game experience, there are other factors that we find essential,” says Närhi .

“One of them is the small download size for the game. This combined with a lot of hard work to optimise for entry-level devices has brought us significant amount of players across the globe.

“This, and the ability to play offline has contributed to having a strong foothold also in the emerging markets. Of course one has to remember that Hill Climb Racing was among the first big hit games on the Android market while many others were solely focusing on the Apple App Store. This helped Hill Climb Racing to become the go-to app on the store.”

While much of the mobile games industry’s multi-billion dollar success relies on multi-million dollar user acquisition campaigns, Fingersoft boasts that much of its traffic has been generated organically without “significant investment” in marketing.

That growth has meant the company hasn’t needed to court outside investment to date and remains fully owned by its founder and other key staffers.

Närhi says while the studio has had some luck in being in the right place at the right time to get its game to resonate with audiences at such a large scale, it has done a number of things to increase its odds of success.

“We have an internal guideline to always put the player first,” he says.

“This has resulted in Hill Climb Racing being very well known for its fairness. We are fixed on building a community of hill climbers and serving them to the best of our ability. Fairness is an unspoken agreement that we are committed to stand by.

“One of our key processes has always been user support. Not only can we help our players with the issues they might be facing, we’ve also formed a very good connection with them and their wishes.

“This played a key role in designing Hill Climb Racing 2 - we knew a bulk of our players were looking forward to such an experience. I know a lot of companies want to outsource the support, not the least because of the inherent negative feedback, but I think they’re missing something valuable here.”

I know a lot of companies want to outsource the support, not the least because of the inherent negative feedback, but I think they’re missing something valuable.

Närhi adds that another element of its success is having a clear long-term focus in how it operates and grows.

“This leads to us having more and more of fans that recognize the value proposition of Hill Climb Racing: the best in its class."

Perhaps it’s too early to eye up the next billion downloads, but Fingersoft still believes there’s a lot of untapped potential in the Hill Climb Racing brand.

The studio’s marketing director Sami Saari says it have a growing community of fans, which it works with on some of its live events for Hill Climb Racing 2.

But on top of adding more content, the studio has more technical plans it’s set to deploy to hit the next billion players.

“For one, we have still a lot to do with the social aspect,” says Saari.

“We’re missing obvious things such as teams and chat that should definitely contribute to a more engaged player base. To that end, we’re also just getting to third gear on our community-building.

“We’ve also barely scratched the surface with our UA efforts. Our brand has a huge global recognition that will help us get a lot of free downloads, but I believe that, combined with proper community-building, will put us on a new trajectory.”