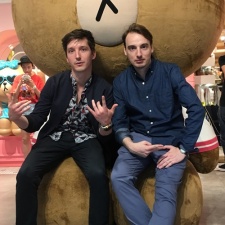 After years spent at mobile games publisher during its premium mobile gaming years at the height of the company’s success, a team of developers left during the shift to free-to-play to form their own studio.

Oh BiBi is headed up by CEO Stanislas Dewavrin (pictured main, right) and COO Martial Valery (pictured main, left), who had previously worked on Gameloft’s most successful titles Minion Rush and the Asphalt series. Combined, those games have racked up well over a billion downloads.

“We could feel at the time that Gameloft was not as well positioned to be a leader in mobile free-to-play as it was in the past for everything regarding things like premium games on the iPhone,” Valery tells PocketGamer.biz.

He says that after realising “this boat was not going to turn, and it was too big to turn”, he set up his own studio co-founder Dewavrin, raising around €3 million in 2014.

18 months and €2 million later, the team had released a couple titles, including Monster and Commander. It was not a success, bringing in lifetime revenues of €300,000.

"There was a bit of Gameloft mentality in us in that we thought we would find a good project then find a team to make that project,” admits Valery.

Learning from those lessons, the team at Oh BiBi decided to make a game in six months with five people. By January 2017 it soft-launched multiplayer racing title SUP and it quickly began generating 30k to 40k installs each day with only around €50 spent a day on marketing.

Following its global launch in June 2017, the game has now gone on to generate 25 million downloads to date. And in the process it restored the team’s self-belief.

“We were kind of broken by our first failure, and the objective with this game was to make a popular game,” says Valery.

“That was it. No big focus on monetisation or that kind of thing. We wanted to build our self confidence back in a very quick way.

“What we realised is it's not because you've suffered failure that you need to aim low. With this game and now on the next game we're working on, we're looking more at big gaming genres, big gaming verticals with a lot of traction and established knowledge of what a good game in that category is.

“I think these days we've finally found ourselves, and we're trying to be the ideal version of Gameloft.”

Having learned those harsh lessons of the past and refound its confidence, Oh BiBi is launching a new real-time multiplayer shooter called FRAG for iOS and Android.

And it’s at a time when Fortnite and PUBG Mobile, among other titles, are proving there’s an audience for these FPS experiences on the platform.

But not just developing the game, Oh BiBi has also doubled down on creating a social platform with FRAG that integrates communication and video sharing into the experience.

To support the studio with this release and other titles in development in those big genres, it has secured $21 million in a Series B investment round led by Atomico of Supercell and Rovio fame. Korelya Capital also participated in the round.

We were kind of broken by our first failure, and the objective with this game was to make a popular game.

“When we started working on FRAG six months ago, we knew there was no reason why a shooter game could not dominate the top grossing rankings for mobile games,” says Valery.

“Now Fortnite has demonstrated it was possible, we're ready to challenge their claim for best mobile shooter and with Atomico onboard, as one of the most active VCs investing in the games sector today, we are well equipped to scale and looking forward to the challenge.”

Oh BiBi CEO Stanislas Dewavrin says the studio is on a mission to "make free-to-play fun to play".

"Our unique blend of creative approach and data-driven infrastructure means we build extremely ambitious games with very small autonomous teams of no more than six," he says.

"This means we need to hire the very best of the best in our industry who like working autonomously and this latest investment by Atomico will allow us to turbocharge that hiring and the launch of our first game in the shooter genre FRAG”.