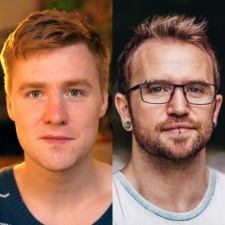 With work on Bad North just about wrapped up, Plausible Concept’s Oskar Stålberg (pictured main, left) and Richard Meredith (pictured main, right) find themselves with a rare moment of calm and in an ample moment to reflect on Bad North's developmental journey.

A self-stylised charming but brutal real-time tactics rogue-lite, Plausible Concept’s maiden title pits you against a horde of Viking invaders who are out to claim your quaint plot of land.

Throw in a beautiful array of watered down tones to the visuals and war rarely appears so serene. That is until the Vikings come.

Back around November 2016, however, masterminding the tactics of battle wasn’t to be the focus of the gameplay. Instead it was going to be centred on a cat that may have had an occupation as a mailman.

“I started, actually, building something quite different with some sort of turn-of-the-century houses with winding staircases,” Stålberg tells us.

“I was going to make a game where you were a little cat, possibly a mailman cat, who would deliver mail in these weird towers.

"But I didn’t manage to make that fun, so I added some violence instead. As that’s how you make games fun apparently!”

The project would start to take on a shape more akin to Bad North around New Year. A fan of another tower-defence game called Revenge of the Titans, Stålberg was inspired by its minimalist visual style along with the strategy and melee-based combat of the Total War series.

I was going to make a game where you were a little cat, possibly a mailman cat.

The introduction of Vikings then followed on as a logical step as invaders had to use boats to reach the small islands of the game.

“I always wanted to explore what you could do with those ebbs and flows of a melee battlefield with units getting tossed around and having to constantly re-evaluate their formation,” says Stålberg.

“I was also quite interested in the path findings you would have to do to guide a lot of units at the same time around a complex map with a lot of overhangs and passages.”

A veteran of Ubisoft and Monument Valley developer Ustwo, Stålberg built up a signature art style that made its way into Bad North. While a fan of the minimalist visuals Revenge of the Titans had on show, smaller 3D environments had always been present in Stålberg’s art.

“Small diorama-like environments have been a thread throughout all my art for quite some time,” says Stålberg.

“I have done a bunch of illustrations where I take pictures of little pieces of the environment, like a mushroom or a rotten tree-stump or something like that, and draw little houses on it.

“So I have always been attracted to these little compact little worlds where you can see everything at once.”

The thread of minimalism is also something that finds itself woven through the gameplay.

We’re focusing on a different audience that seems to be interested in playing strategic games like this but were put off by the complexity and the up-front demands of a typical RTS.

Having joined the team around April of 2017 to add some coding muscle, co-developer Meredith believes balancing a minimalist approach with real-time strategy tropes allows them to make Bad North more inclusive for players.

“We’re focusing on a different audience that seems to be interested in playing strategic games like this but were put off by the complexity and the up-front demands of a typical RTS,” says Meredith.

“An RTS would expect you to be able to manage a lot of troops, systems, rules and numbers before you start having fun with it, whereas in this game a lot of those systems are there but are hidden away so you can get into it a lot more easily.

“Then over time you’ll start to feel out what the systems and mechanics are in a less explicit way and all of that is more inviting to quite a lot of people.”

While Plausible Concept is fond of keeping things as boiled down as possible there is still complexity present in the way units behave.

The concept was introduced to make them more human-like in their movements and actions rather than other real-time strategy games where units tend to turn on a dime or act behave perfectly.

“Minimalism is the thread that runs through just about everything in the game. It’s not to say that there isn’t complexity there because everything is simulated,” Meredith explains.

“When you’re controlling squads of units each soldier is making a decision for themselves individually and that creates patterns of behaviour that you’re not fully in control of and that you need to feel out.

“Because we’re also dealing with small numbers of soldiers on a grid you can see if you place them on a grid tile then they’ll come and behave in a certain way because of the landscape around them.

The security of going onto Switch is a lot better than mobile and PC.

Despite originally starting out solely as a mobile project, Plausible Concept has extended the launch of the game to Nintendo Switch, PC and consoles.

According to Meredith, partnering with Nintendo and Raw Fury has allowed the team a sense of comfort that Bad North won’t become lost in the noise.

“There was definitely a significant worry for us about visibility,” he says.

“Switch became our lead platform in many ways because it is quite similar in where the game started off from, in terms of mobile.

“But also because of the security of going onto Switch is a lot better than mobile and PC.”

Meredith elaborated that while he believes the game will be a good fit for Android and iOS that a wider word of mouth generated from releasing on other consoles will stand it in good stead.

“I still really feel that the mobile market for this game could be really big and quite significant,” says Meredith.

"But it’s scary for an indie. It’s scary to make that be the only place that you’re going to.”

Despite all the work and worry, however, a sense of excitement is still building ahead of Bad North's release, while a date hasn’t been confirmed yet.

This is the first game where I’ll feel like that this is my game, my piece of artwork that I’m putting out there.

Between them, Stålberg and Meredith have worked on plenty of triple-A titles, with Stålberg working as a technical artist on Ubisoft’s The Division and Meredith providing code for Tarsier Studios’ Little Nightmares and Little Big Planet 3.

However, as their first indie game Bad North represents something they can enjoy a greater feeling of ownership over.

“It’s going to be super exciting as it’s our first indie game, we’ve both worked on bigger titles before,” says Stålberg.

“But this is the first game where I’ll feel like that this is my game, my piece of artwork that I’m putting out there.”

You can read more interviews from our Indie Spotlight series here.