"I had way too much confidence": Ben Esposito on Donut County's six year journey through development 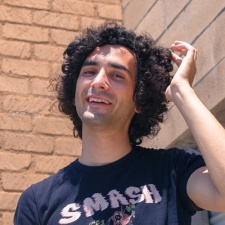 Ben Esposito’s body of work is eclectic. Some of it is more tongue-in-cheek and low-key like 2013’s Brooklyn Trash King, a currently unattainable title about a hotshot dev who must grovel to a king rodent to snag funding for their reasonably poor crowdfunding campaign.

Other games are sombre and wide-ranging in their renown, such as last year’s What Remains of Edith Finch by Giant Sparrow, of which Ben did prototyping and consulted on game design for a major part of the development.

Esposito’s story-based physics puzzle game Donut County has only just launched, but the idea was conceived way back in 2012 when he was first starting out in games development.

Published by Annapurna Interactive, the concept for the hole in the ground-inspired gameplay comes from an unlikely combination of a parody account of Fable developer Peter Molyneux and third-person puzzle-adventure game Katamari Damacy.

The parody account on Twitter presents Molyneux as a tragicomedy character with hopeful but outlandish ideas of what video games can be which land on the ears of uninterested bystanders.

The account gained popularity throughout 2011, which led to a game jam with Molyneux’ faux ideas as the theme and Esposito with a tweet about playing as a hole.

“The very first thing I realised was ‘oh wait, this is kind of boring if you’re just a hole,” Esposito tells PocketGamer.Biz.

“Then I realised that it was interesting if you start small and have to plan your path to pick up objects so each one makes you a little bit bigger.

“So there’s definitely a Katamari Damacy influence there because there is a similar sense of path planning and ordering gameplay that I think is very satisfying.”

Hot off the heels of his first gig as a level designer in Giant Sparrow’s The Unfinished Swan, Esposito admits that he was perhaps too flush with confidence.

“I feel like I got very lucky and I got the confidence to figure things out on my own and go out on my own,” Esposito tells us.

“So I knew after that game that I really wanted to make my own game and I had way too much confidence at that point so I was like ‘yeah, I’ll go make my own indie game, I have this cool idea about a hole in the ground, it’ll take one year.’

Alone in the hole

Although work didn’t properly begin until 2013, Esposito admits that overshooting his initial 12-month target by five years came due to his decision to go development alone, something he felt empowered to do because of a sense of confidence.

“One of the biggest challenges was the decision to make it by myself,” Esposito admits.

“I can’t say it was a great idea. The point of it was to learn a lot, I wanted to see the whole process and I thought it would be so much easier than it ended up being.

“That’s why I ended up changing the game up so many different times because I had no idea if it was good or not.”

In terms of tonal composition Donut County has more in common with Esposito’s more personal work in being a light parody of modern times.

Much like how Brooklyn Trash Kings teases the plethora of devs on Kickstarter and CRAP! No One Loves Me plays on the worth people find through their phones, Donut County has passed through several iterations to become a reaction to internet culture.

“This one was my attempt to make something that’s very earnest, in terms of what it’s trying to do with its presentation, the way it feels to play the game and the characters are all very earnest,” says Esposito.

“The story has changed a lot in the last few years and I kind of reinvented it a lot of times.

“I think the story ended up being a reaction to being online in 2016 and 2017 and the way the world is changing.

“And so, I have this dynamic with the racoons of this world who are stupidly taking over for no reason and the rest of the characters.

“The game ended up being a reaction and a play on the way stupid ideologies can spread when there is no mechanism to check them.

“The world changed in ways that I never expected, that’s how it goes when you’re making something for so long.”

Unfortunately for Esposito, having his passion project in the public eye for so long came with some unwanted consequences.

Months prior to Donut County’s release he stumbled upon Voodoo’s Hole.io, a mobile game that also utilises a roaming hole that swallows things up and gets bigger.

“I think I was lucky. While it was pretty discouraging, and if I think about it too much I get kind of mad, I think I got kind of lucky that it happened pretty late in the process,” Esposito says.

“I was finished with the game so it couldn’t really stop me from doing anything, I was kind of like ‘I’m locked in I got to do it.

“I think if it had happened a year earlier it would have been way more devastating and I don’t know how I would have reacted really.

“For indie developers, motivation is your biggest resource and if you lose that motivation when you’re in the deepest part of development then it could be a huge problem.”

Esposito’s situation draws comparisons to the cloning issue that has become landed at the feet of indie developers in the mobile scene.

Typically cloners will target premium games and copy the mechanics to a free-to-play variant, in turn making more money through accessibility and more vigorous ads at the expense of the original.

As of right now, there is little advice to developers other than limiting a games visibility before launch. For Esposito, however, that wasn’t possible.

“People wouldn’t have heard of my game if I hadn’t been talking about in 2012 because it led to all these opportunities that let me find partners to work with and money to work on the game,” Esposito says.

“I don’t think it’s up to us as developers to fix. I think the way platforms run can help alleviate that.

“When you have a market that favours free games that use the ad-based model and everyone is used to consuming free games, and they want to consume games really fast and find the next one next week, companies are incentivised to do huge ad spends to get installs on their games that they spent a month maximum on.

“Then it’s on the top of the charts for a week and then they use their ads to point their players to the next game.

“And so, when the content doesn’t matter as much, you’re going to get worse content that just steals from other games that people put a lot of effort into.”

Donut want to be doin' that again

Looking back on Donut County’s six-year journey through development, Esposito admits that he did learn a lot, which is what he originally set out to do.

While he was a mix of nerves and excitement when we last spoke though, going it alone doesn’t appear to be something he’d do so readily again.

“I feel like in a way I’ve learnt a lot, I’ve learnt a lot and I’m better at making games, But I also feel like I saw the dark side and now I really see how hard it is to make games and I feel way underprepared to make them now,” Esposito tells us.

“I feel like it was a really good reality check because I was super confident and I had only made super tiny things, but now I have an understanding of what it costs to make something that’s high quality: turns out it's very expensive!”

This article is part of our Indie Spotlight series. You can check out previous interviews here.