Toys-to-space: The making of Ubisoft's Starlink: Battle for Atlas 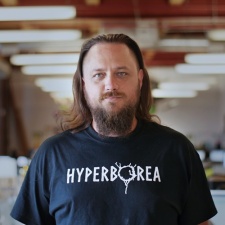 Starlink: Battle of Atlas lead games designer Jesse Knapp is enamoured by the allure of space and what exploring it could bring.

With around five years in development and a team that expanded from 10 to 100, Ubisoft Toronto’s toys-to-life open-world combat game has been on a space odyssey of its own.

As far as games development goes, exploring space is nothing new. What makes Starlink: Battle for Atlas stand out at this moment in time, however, is the toy spaceships that float between its worlds.

The idea for Starlink was forged when a small team was tasked by Ubisoft to create prototypes exploring the use of innovative tech. After hundreds of iterations, the team landed on an idea that allows you to obtain physical models of ships and attach them to your controllers.

Each ship is customisable and can have its wings and weapons swapped with each other, with your Frankenstein creation appearing before you on screen.

Speaking to PocketGamer.biz, Knapp explains the toys themselves presented some of the biggest challenges the developer faced.

“It was something that none of us had ever done before,” he says.

“We’ve all been making games for years, but having a toy and building the interactions there between the game and the toy, figuring out how to build it and building the team to create it, then finally bringing that toy to market, has definitely been the most unique challenge of the project.”

Right from the beginning we knew we had something magical with the toy.

Luckily for Knapp, as the team expanded they were able to surround themselves with the appropriate expertise to act on the unique appeal of these physical creations.

The appeal itself was made apparent following the reactions of players to playtests.

“Right from the beginning we knew we had something magical with the toy," explains Knapp.

"We built our first prototypes and people would play with it and respond to the immediacy of removing a part, adding a part and having it show up in the game and the creative building that you can do.

“So we identified those pillars then stuck to them and built up our expertise, from using off the shelf stuff to using our own circuit boards, from basic stuff to 3D printing and then we hired-in and consulted with toy industry experts, people with experience making toys.

“We brought them onto the team and built up that expertise internally, as well as consulting with folks with decades worth of experience, getting their advice, input and thoughts.

“We really built up a fully functioning toy team.”

While its premise may be matchless among other triple-A releases on the Christmas lead-up, from Rockstar’s Red Dead Redemption 2 to Ubisoft’s own Assassin’s Creed Odyssey, Knapp stresses Starlink retains Ubisoft’s footprint.

“Ubisoft has always been a big supporter of Starlink, and the entirety of the organisation has helped us make the game what it is today,” says Knapp.

“We draw heavily from the open-world roots of the company to bring something that’s new and fresh, set in space, traversing seven planets and space completely seamlessly while building your own starship.”

Concerning the passing trend of toys-to-life, Knapp appears unfazed and reckons the charm of Starlink stems from the toy itself. On top of that, he explains that a raft of additions to make its playing experience flexible will also go a long way.

“So early in our playtests, we had the real-time swap completely enabled by default,” Says Knapp.

“What we found is that people would take a part off the toy then look down at the table and get defeated by enemies, as they weren’t looking at the screen.

“So now we have that on default that it pauses the game when you remove a part to give you more time to process.”

Another challenge the team faced was balancing a romantic idea of the vastness of space with a game that felt alive with things to do.

Plenty of studios have tackled the balancing act of space and have been met with challenges, with Hello Games’ effort No Man’s Sky dividing opinion for leaning toward exploration and, for some, lacking in things to do.

We worked a lot to make a scale that still made space feel big and the planets still feel vast.

For Knapp, however, the key lies in fine-tuning a sense of scale, from tweaking the distance between planets to even how spherical they may appear.

“One thing we realised is that we needed to maintain that sense of scale but make something that’s a little more exciting because at the end of the day we also wanted to make an action adventure game,” says Knapp.

“We needed to stay engaged, so we worked a lot to make a scale that still made space feel big and the planets still feel vast, but that also maintains good pacing where there things to do and places to see.”

A unique consideration for Ubisoft Toronto was its partnership with Nintendo. Along with the game coming to Nintendo Switch, the developer also managed to snag the IP to Starfox, having the star-faring pilot appear in the game.

While Knapp admits the team needed to work with them to make sure things fitted their standards, a sense of excitement stemmed from working with an IP he was personally a fan of.

“The collaboration was exciting for us when we heard about it,” Knapp tells us.

“Even earlier on in the game Star Fox had been one of the games we thought about and looked to for inspiration of what it’s like to play a space game and to explore and adventure in your spaceship.”

Regarding blending the Switch’s on the go personality with Starlink’s stationary need to plant and tweak toys, Knapp explains the team overcame the problem by allowing the toys to stay with the dock while the Switch could be taken on the road.

“The interaction between the toy and the user, and the toy and the game, has always been at the core of our inspiration and what we’ve been doing with Starlink,” Knapp tells us.

While Starlink: Battle for Atlas does have some strong backing with a link to Nintendo that’ll no doubt endear it to many, it does represent a - albeit exciting - risk.

That said, such risks can often yield greater rewards and with Christmas looming on the horizon, it may be a well-timed risk at that.

For Knapp, however, such feelings seem kept well at bay.

“It’s the longest I’ve worked on a single game but the feelings aren’t really that different for me, just bigger, stronger and more out there,” says Knapp.

“It’s exciting to see my friends my family, friends and strangers play Starlink and see what they think.”