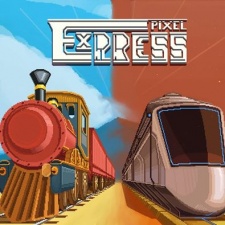 Today, we're speaking to Andriy Bychkovskyi from Angry Kid, who submited Pixel Express to The Big Indie Pitch at GIC 2018 and walked away with the prize for third place.

I mostly do programming and game design, but am also capable of doing terrible pixel art. Our team is not really a studio, because we all work from homes on a semi-volunteer basis. On the team we also have Pavlo Shelyazhenko who has solid experience as a software engineer (worked at a company called Google) and released a successful puzzle game called Move the Box.

Sergiy Buryak (graphics) – a young, but very talented 2D artist. And 8-BITchin’tendo (sound), who is an underground chiptune musician from Poland and who prefers not to talk a lot about himself.

The project is called Pixel Express. It's an arcade, retro-styled game about trains. You control a railroad by switching rails intersections and arranging trains in order to deliver cargo with a proper train.

It all started at Global Game Jam where I made a small prototype and asked 8-BITchin’tendo if I can use his music in the game.

He agreed and enjoyed the game, so we decided to work together and expand the prototype into a real game. After that, I gave a shout out for additional people and found Pavlo who knew me for my previous game (Undervault) and Sergiy who was a beginner artist at that time but did a great job in a test assignment that I gave him.

Ah, don't worry, it’s not that hard. Gather a team (with no budget), make a great game and then sell it! That's pretty much it. Yes, we haven’t made it yet, but we keep trying.

Seriously speaking, all struggles are worth it for myself because in the end, I’m doing things that I’m passionate about and that give me a meaning in life.

It was fun! We actually did it two times. The first time was in Helsinki during PG Connects. By some mistake, we got into PC Indie Pitch, so our relatively small game was a little misunderstood there.

But we didn’t give up and in about a month I’ve got a chance to visit GIC in Poznan where this time we participated in the Big Indie Pitch (for mobile) and took third place.

Speaking more about the pitch itself. The jury members are really friendly and they give an honest feedback during the pitch and after it (an email with summary made by Sophia) which is always valuable.

For any future participants, I suggest to prepare a structure for your pitch and rehearse it well.

I definitely became stronger and more confident in pitching my game to the industry experts. I can’t imagine doing this one year ago, especially in English which is not my native language.

What do I hope to gain? Probably that shiny baseball bat!

We want to release it on PC and mobile platforms in early 2019. We already made a lot of iterations on the game and now it feels good enough, we just need to spare some time to actually get it done.

As for future projects, I personally have one in mind. It’s based on my first game Undervault, but with reworked graphics, new mechanics and story.

This is going to be the most ambitious project for me to date. But I’m still trying to get enough funds to make it real.