Making Of: How East Side Games got the It's Always Sunny gang to go mobile 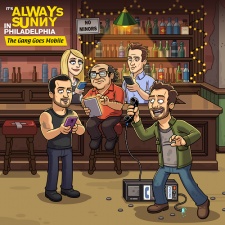 Duncan McPherson is the senior product manager at East Side Games.

This week we spoke with East Side Games senior product manager Duncan McPherson about how the success of Trailer Park Boys: Greasy Money got the It's Always Sunny gang to go mobile.

PocketGamer.biz: Where did the initial idea for the game come from?

Duncan McPherson: We have a lot of long-time fans of the show in the office. After the success of Trailer Park Boys: Greasy Money, we realised that this narrative idle format would be a natural fit for the humour, hijinks and hilarious characters of It's Always Sunny in Philadelphia

We were lucky enough to get in touch with David Hornsby (Cricket) via his agent. His agent then set up a call with our studio art director John Marinakis to discuss the direction.

How did the collaboration come about between the team and the creators/cast of Always Sunny?

Working on a successful product based on a television IP opened up some doors to our founders, Jason Bailey, Josh Nilson, and Galan Akin. They were able to start a conversation with the team at Fox, which led to a few more conversations, and finally to the development of It's Always Sunny: The Gang Goes Mobile!

Are there any memorable stories you can share about developing alongside the cast of Always Sunny?

Early in development, we were working out the likenesses of the main cast and a few of the major recurring characters. At this time, we were lucky enough to get in touch with David Hornsby (Cricket) via his agent. His agent then set up a call with our studio art director John Marinakis to discuss the direction.

Before the meeting, David Hornsby's agent forwarded an image of Cricket that represented the changes they wanted to see. First of all, the sketch that he sent was really good. We were surprised to learn that David had created it! As it turned out, David had some experience working with animators and picked a few things up.

The feedback was also very strong. When you're making a caricatured celebrity likeness of any sort, some of the choices carry a degree of risk. You don't want to offend the talent or to do anything that might be incredibly unflattering.

David, on the other hand, was very bold with his notes. He asked for our version of Cricket to be thinner, bonier in the shoulders, with a narrow, tall head or what he called a "fivehead". On top of that, he wanted Cricket to have a shorter jaw; a longer, thinner neck; and - most importantly - sad, tired eyes.

We quickly turned around a version that respected David's feedback, and we agreed it was a much better, much more memorable version of the character. He immediately approved it upon review, too.

Part of the reason that I love game development is that I get to work with so many talented, creative, passionate people. However, as any producer or product manager can tell you, getting that energy focused on a clear set of goals early on is of the utmost importance.

When I first came to the project, we didn't quite have the team-wide understanding of our creative pillars that's essential to any project's success. Building that shared understanding while we were in development was difficult, but ultimately rewarding, as the game came into focus.

As we entered the final quarter before our worldwide launch, I felt as though the game was properly set up for success over the long term. Events were working, we had more scripts approved and more content in the development queue, and we had a solid roadmap for feature development in the months ahead.

Was the game soft launched? If so, what did you learn from the soft launch period, and what were the biggest changes you enacted as a result?

Yes! We soft-launched in the Philippines first in order to test our stability. We then rolled out the game across the Scandinavian nations, then the UK, Australia and New Zealand. While these audiences weren't as familiar with It's Always Sunny, they were more familiar with incremental games in general and were more inclined to appreciate the brand of humour that It's Always Sunny provides.

Our players overwhelmingly like the narrative, the art, and feel a connection to these characters through the act of play.

We knew that players would be engaged with the game, but we didn't know how engaged. Soft launch gave us the necessary insights so that we could get more scripts approved and provide more content to players who, quite obviously, love the show, the humour, and the game itself.

As a producer and product owner, I'm very happy with the way the game’s performing so far. Getting positive feedback from fans of the show is certainly validating, but I’ve also been happy to see players who were not familiar with It’s Always Sunny give the game strong reviews while expressing interest in the show.

Our players overwhelmingly like the narrative, the art, and feel a connection to these characters through the act of play. The fact is, people who enjoy this game, really enjoy this game. The passion and energy of Sunny fans is something to behold. I'm excited to get more content and more features into the game so that we can continue the fun with this audience.

We have a content cadence and a client cadence on the project, with efforts split between the content team and the engineering team. We're constantly working to better understand our capacity and how we can reduce points of friction in our development so that we can work at a pace that's responsive to the needs of the game, yet remains sustainable and predictable.

Our client cadence is currently set to approximately one client update every month. We're currently focused on feature development, but have also mapped out the bandwidth to address any top-trending live issues reported by our Community team or noted by players in our social channels.

As far as our client roadmap goes, we’re currently working on expansions to our leaderboard system, which includes the use of more social mechanics. We're also working on a plan for concurrent, continuous events, as well as multiple event types so that players always have something to pique their interest and help them enjoy more shenanigans with the Gang. As we continue to streamline our content pipeline, we hope to deliver more content at a faster rate to help meet player demand.

East Side Games has had the chance to work with some great partners with our IdleKit framework. Our IdleKit team is currently celebrating Kano’s release of Fubar: Just Give'r. We have a lot of exciting opportunities on the horizon, but it’s a bit too early to announce anything as yet.