"Going in, I don't think we realised what a huge challenge it was going to be to bring Spyder to life" 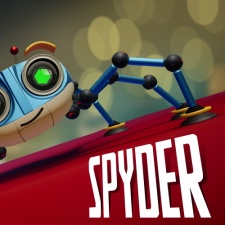 This week we spoke with Sumo Digital lead game designer Nic Cusworth about its newly-released Apple Arcade title Spyder and the trials of making a spider-sized perspective simple to understand.

PocketGamer.biz: What was the inspiration behind Spyder?

Nic Cusworth: Spyder began life as the winner of an internal game jam competition, put together by three of the Sheffield studio designers. Everyone really latched onto the unique navigation possibilities of having a spider as a game character. The project was internally greenlit, and a small team was assembled to flesh out the world the spider would inhabit.

Several different scenarios were developed, but the spy genre stood out as offering something both unique and perfectly fitting with the concept of being a tiny spider in a human world.

Stylistically, we wanted to capture the feel of 60s Bond movie sets, and also the mid-century modernism of Pixar movies like The Incredibles. Internally, we describe the game's style as being ‘retro-mantic’, a romanticising of a retro look and feel.

What attracted you to developing a game for Apple Arcade, and how did the partnership with Apple come about?

The team had put together an early demo of the game and it really resonated with Apple, who were looking for games for the Apple Arcade service. For us it felt like a great opportunity to bring the game to a whole new ecosystem and player base.

It took us a while to find the right balance between complete freedom of movement and subtly pathing and guiding the player around a level.

Development was around 18 months, with a small team creating prototypes for around six months, then full production for about a year. At its peak there were around 60 people working on the game.

Going in, I don't think we realised what a huge challenge it was going to be to bring Spyder to life. There are so many unique aspects to the game, from building environments that read well at 'Spyder scale', to handling a character whose core skill is the ability to walk on any surface.

It took us a while to find the right balance between complete freedom of movement and subtly pathing and guiding the player around a level. Also choosing the right kind of environments was a challenge. Anything too open, like a desk, was a chore to walk around, and anything too abstract had players completely lost.

We also didn't want our environments to feel like they were forced to work at Spyder scale. That's why there's often humans in the background of the levels, to constantly remind the player that you are playing in a human space – just from a completely different perspective.

It took quite a while for it all to really come together. You've got a complex, physics driven character who can walk anywhere, and the challenge of building a world for that character that works in both human and Spyder space.

There was a turning point about July/August last year where the character became really fun to play and we'd learnt enough about building the environments to start really solidifying the game.

Are there any plans for future updates to Spyder, and what can you tell us about your future mobile projects?

Unfortunately, I can't comment on future updates or projects.

Will Sumo continue to develop premium games for mobile, or are you exploring the free-to-play market as well?

Absolutely. We have The Chinese Room in Brighton who are working on Little Orpheus for Apple Arcade, and the Sumo Leamington studio is focused on games for mobile platforms.