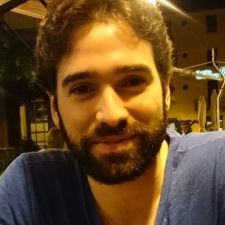 So welcome to the Indie Spotlight, where each week a developer tells us about their life and
work, and the challenges facing indie developers in the modern mobile market.

This week, we spoke to Pomelo Games programmer and game designer Máximo Martínez on leaving his role to start a company, as well as what tips are needed to launch your first game.

Maximo Martinez: When we began, we were four friends from college, doing whatever programming work came our way. In all honesty, we really wanted to develop games so we began to build some projects on the side.

After a while we came to the conclusion that we needed to have someone with full-time dedication, so we split the team between two people doing consultancy work, and the other two working on our games. Throw some artists into the mix and our first game Bullet Boy was born.

Since we managed to make a living from game development, a typical day is what you'd expect to find in a standard office. For the most part, we work between 9am to 6pm, split in the middle by a long hour for lunch and playing games together.

Starting out there were many doubts whether we could actually make a living working on games. There have been some challenges along the way, such as dealing with mobile app store changes since we are currently only focused on one platform.

Success is being able to have the whole team make a decent living from what we do, as well as creating games that we think are genuinely good. Something that we can look back at and be proud of.

It's a highly competitive market, and it's getting even more competitive each year. That said, it's probably one of the best markets to enter as an indie developer since smaller games still have a decent chance of turning over a profit.

Could you tell us about Outlanders?

Outlanders is our latest game, a town-builder simulator that lets players lead a group of villagers in building a town together. It was a very different project for the team, as it was our first time experimenting on a strategy/simulation game.

It certainly was a challenge, but it was also hugely rewarding to be given the opportunity to explore something new.

For us, the main attraction of creating a game for Apple Arcade was that it allowed us to explore developing a game without having to worry about monetization or consider free-to-play mechanics.

In that sense, this is our purest game. More importantly, everyone in the office adores the game and is super proud of what we have achieved.

We have some new games in the pipeline that will make their way to iOS and Android over the next few months. Long-term, we would like to keep improving on what we are doing currently. At the same time, it would be great to dive into some new markets like Steam and console.

I'm a big fan of immersive puzzle games like The Witness and would love to work on something similar. Everyone in our team is massively passionate about games as a whole, with all of us having our personal preferences. We love playing them and then discussing the details.

So, in fact, there would probably be a huge amount of varied options available to us and interesting avenues to venture down.

Well, it depends on what 'making it' means for them specifically. But I would say talking to other developers to learn from what succeeded for them but also failed would be a useful first step. For us, it was creating small free-to-play mobile games with good polish, then coordinating alongside stores to get them featured.