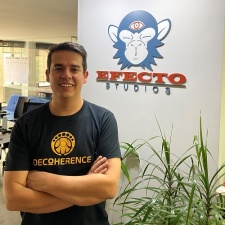 This week, we spoke to Efecto Studios CEO and co-founder Eivar Rojas Castro to discuss the development of Decoherence on Apple Arcade.

Eivar Rojas Castro: We started out 15 years ago as Immersion Games in 2002. It was a six-person team with no clients and no local industry, while also being the first video game studio established in Colombia.

We developed projects for different clients and platforms, starting mainly with art for our first client Artificial Studios, on games like Monster Madness, a tech demo for Ageia PhysX, and more. However, the team struggled to grow a studio in Latin America and we were forced to close the studio. But it was a big lesson, and from that experience we started Efecto Studios in 2011, balancing the combination between our own IP and work-for-hire.

As an indie developer, you have to deal with tons of these different day-to-day situations. Every day is simply not just dealing with the workload but can also be managing the team, clients and ongoing project developments. Finding the balance between all of this can be a challenge, though this never impacts our commitment to never delaying our delivery while still aiming for maximum quality.

It was a six-person team with no clients and no local industry.

Our biggest challenge was facing the closure of our original studio. Additionally, finding the right team to prototype and produce internal projects was troublesome due to us having multiple iterations for game ideas, which requires a lot of focus and dedication.

We started showcasing the project three years ago in spaces like PAX East, GDC, Gamescom, and several other events around the world. This helped expose the project to further opportunities that wouldn't have been possible without. It also gave us the chance to refine and tune the experience, which we believe helped Apple to see the potential.

We started this project five years ago, with no clear platform in mind. Decoherence provides a very particular gameplay experience with the planning and battle mechanics.

We thought that it would be a good match for Apple Arcade, and having a multiplayer cross-platform enriches the user experience. So, it led us to have the opportunity to run the game on all Apple devices.

I could define Success as a way to enjoy what you do while keeping up that quality of life - both professionally and personally.

The mobile games market is huge and also highly competitive. Mobile devices have become a significant segment for the video games industry, with users continuously improving their perception about games with good production values. Every day, quality content is becoming more attractive than superficial experiences.

I think an unlimited budget would end up creating endless development.

Could you tell us about Decoherence?

Decoherence is an action-strategy game that integrates thoughtful planning with real-time action: players can build robots with a wide variety of components, set up their orders and then fight alongside them against your opponent’s team. Users can join playing multiplayer or a challenge mode.

We are always working to continuously improve Decoherence, planning new exciting features to enrich the game experience, as well as building our community to engage players around the game.

I think an unlimited budget would end up creating endless development. Limitations are important and sometimes, very useful. For me, it is more important to think of gradually bigger budgets, so we grow in expectations and experience, instead of thinking in an infinite stream of money.

Game ideas can flow very quickly. Executing a good idea can take time and tremendous effort, so before onboarding, the full production, iterate the prototype idea as much as you can and validate it on spaces where you can receive honest feedback.