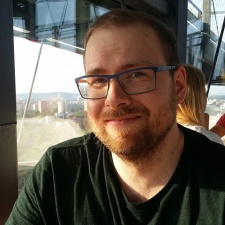 This week, we spoke to Amanita Design lead designer Radim Jurda on joining the studio and the development of Creaks for Apple Arcade.

Radim Jurda: It all started during my university studies. I created the concept for our new game Creaks as my diploma thesis. With my good friend Jan Chlup (co-author of Creaks), I began designing the game mechanics, concept art, story ideas, and together we created the first playable prototypes.

On an evening, I would go for a walk to clear my head and move my body a little because making games is a very sedentary job

During that time, I went for a beer with the founder of Amanita Design, Jakub Dvorský, to discuss the game. Dvorský liked the concept a lot and took me and Jan under Amanita's wings, helping us to build the team and production of the game.

All our team members work from their homes, so it's hard sometimes to separate the job from personal life. We have Skype meetings every morning every working day and then continue working during the day, while also texting and calling each other if needed.

On an evening, I would go for a walk to clear my head and move my body a little because making games is a very sedentary job. We try to keep our weekends free, as I like to go out with friends and play board games to take a break from looking at a screen.

We were a new team inside Amanita Design, so because it was our team's debut and the team was small, it took us many years to finish the game. It was challenging to stay focused and motivated for such a long period of time. My social life was suffering a bit as I spent many days in front of my computer, especially when the release date of Creaks became closer and closer.

Since Creaks is our team's first title, I am pleased that we finished with the quality we wanted. Players who enjoy puzzle-focused games like Braid, The Swapper, The Witness, or any of Amanita's previous titles seem to enjoy it too.

From a financial point of view, a game is successful if it finds its way to the audience, pays its costs and earns some money, so we can start making a new one.

I think the mobile games market is a jungle these days, full of games that only exist to generate income and rely on using dirty tricks to hook the players and make them pay more money.

In that perspective, I like the Apple Arcade platform because it's a place full of quality games without advertisements and an excellent opportunity for independent games like ours.

Could you tell us about Creaks and why the game felt right for mobile?

Creaks is a logic-based puzzle game full of strange creatures that are monsters in the dark and harmless everyday objects in the light. We call these creatures Creaks, with a few different types available. Each of them behaves differently, and it's up to the player to use both of their shadow and light forms to solve the puzzles and proceed in the exploration of the strange underground world our hero finds under his room.

Gameplay-wise, it involves a lot of puzzle-solving and I think it's a good fit for mobile devices because it's playable in short play sessions. The game doesn't require quick fingers or reflexes, so you can enjoy it chilling on your couch. It's better enjoyed at home on a sofa, rather than on a crowded tram, because Creaks is very much focused on a strong atmosphere and it's good to play it in a calm environment so it can immerse you into its world.

I don't have the ambition to make a huge triple-A game, because the games that have impacted me the most are usually indie games

Amanita has had good relationships with Apple for a while, and we were fortunate enough to start a conversation with them about potential collaboration within Apple Arcade. During that time, another team at Amanita was working on Pilgrims - our first Apple Arcade title - which was primarily designed for mobile devices, so it seemed to be a perfect fit for Apple Arcade.

Shortly after, we pitched Creaks and Apple liked the game enough to support it and include it in the Arcade line-up. Initially, we were not planning to release Creaks on mobile at all, but once we fine-tuned the touch controls, it worked surprisingly well and we're glad this collaboration happened.

I think one of the key motivations was that it would help us reach an entirely new audience, but I wouldn't say the entire game was made specifically for Apple Arcade - since it was in development for about eight years. There were many things, though, we needed to consider for the Apple Arcade versions, iOS in particular.

For example, the game was initially created for 16:9 and 16:10 aspect ratios but there are a lot more formats across the iOS platform, such as iPhone X etcetera. or the new 11-inch iPad Pro. Therefore, we needed to manually edit all cameras for each aspect ratio, as well as fill in some of the missing pieces of visuals that were suddenly revealed in these new formats.

We're lucky enough to say that the pandemic hasn't directly affected the studio. Our team is scattered all over the country and even beyond our borders, so a vast majority of us are used to working from home. Most of the restrictions have been lifted in the Czech Republic and life has basically returned to normal, let's hope we can maintain that.

At the moment, we are still dedicating our time to Creaks, fixing some bugs and preparing some mostly technical updates and preparing some physical goods for the collectors. Then I'm going to take some time off because the past few months were quite intense.

After that, I'd like to start thinking about a new project and help fellow Amanita teams with the two games currently in active development.

As I receive feedback on Creaks, I'm slowly getting in the mood for a new project. I am tempted to make a board game. I've got a few concepts in my drawer. Anyway, I don't think I would ever need a budget bigger than the one we had for Creaks.

I don't have the ambition to make a huge triple-A game, because the games that have impacted me the most are usually indie games (and Half-Life!). Also, I enjoy working in a small team where we are all friends and each member of the team leaves a strong footprint on the game. And I've got to admit: I am scared of leading a thousand people team that some of the triple-A games have.

Be patient, and try to keep order in your code and graphics files. Developing a game is a long-term job. You will often be working with a younger version of yourself, as you will be opening old documents and trying to understand all those layers you created a few years ago. And it's nice to be able to cooperate with that person from the past.