"They understood our vision for the company" 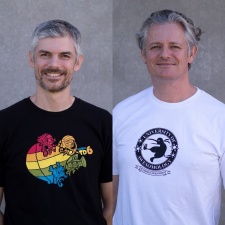 It's near-impossible to go a week without a company either being acquired, sold or split apart in the games industry.

The conversation and decision-making that leads to an acquisition being made is one that doesn't take place simply overnight.

It's one that requires numerous pieces to be placed accordingly before the final go-ahead can be made. All that's normally shared will be the announcement, none of the inner workings.

So, to shed a little light on what goes on behind-the-scenes, PocketGamer.biz will be speaking to a variety of companies under our semi-regular Done Deal series, which will look into strategy, long-term goals and the ongoing hurdles of making an acquisition.

PocketGamer.biz: The company was founded in 2006, was this the first time a conversation surrounding the purchase of the Ninja Kiwi came about?

Chris Harris: We had been approached by other groups on numerous occasions over the years, but the conversation with MTG was the first where everything made sense.

Why did you think MTG was a company you’d like to be acquired by?

Chris Harris: As with any decision of this calibre, this was very considered - we got to know the whole senior team well over a good period of time, so we could ensure MTG’s values were well-aligned with our own.

High on our list of priorities were maintaining creative autonomy and job security - above all, we wanted to be confident that we were doing the right thing for the business, our fans and of course our people, in the long term. We knew that MTG respected our team and everything that had been achieved at Ninja Kiwi to date and that they understood our vision for the company.

We knew that MTG respected our team and everything that had been achieved at Ninja Kiwi to date, and that they understood our vision for the company.

We were also interested in the opportunities that would present themselves by being part of the MTG group of companies - which include the leading esports brands ESL and DreamHack in ESL Gaming as well as acclaimed gaming studios and publishers like InnoGames, Kongregate and Hutch - in terms of gaining access to the expertise and insight across the wider portfolio.

Can you explain where the idea for the acquisition came from?

Chris Harris: Initially, we were introduced to the MTG team almost three years ago through Kongregate, which has been part of MTG’s gaming vertical since the company was acquired by MTG in 2015.

Ninja Kiwi has hosted a number of popular titles on the Kongregate gaming platform over the years; they raised the idea and we started a conversation.

We hadn’t heard of MTG before their acquisition of Kongregate, but developed and maintained a relationship over a number of years and have the utmost respect for their team.

When you’re an entrepreneur your company isn’t just important to you - it's really your life's work.

You have a real responsibility to the people you’ve brought on to work on your games, to the fans loving and playing the games and to the partners you’ve worked with along the way.

I think a lot of other entrepreneurs can relate to the fact that selling your company is a complex process, and that every step of the way, you’re very much aware of these responsibilities. That’s why we’re very pleased - and relieved - to have found what we believe is a great home for our games and people in MTG.

Chris Harris: From our perspective, the main goals were a fair price, and to stay in control of our business. Ninja Kiwi already has a number of exciting new titles and developments in the works, both across existing and new IPs.

Our conversations with MTG took place over a number of years but really began in earnest last year...

MTG respects that we have an experienced team and that we have a strong business with good growth potential; they weren’t looking to jump in to our business and tell us what to do.

They are looking to build a diverse portfolio of leading companies across gaming and saw Ninja Kiwi as a company with a strong existing portfolio, and exciting titles in development.

Our conversations with MTG took place over a number of years but really began in earnest last year. From there, the process took around seven to eight months.

Chris Harris: It was a relatively clean process. In retrospect, being slightly naive in some aspects of investment banking may have slowed down the process somewhat - likewise, having the Christmas and summer holidays in the middle of proceedings didn’t necessarily help, as we lost some momentum - but it felt like a smooth deal overall.

Obviously, a transaction with a listed company also comes with new learnings on what operating in a listed environment means, for the group companies that exist and any company acquired by a listed company like MTG, such as having to fairly inform the whole market at once on important actions like acquisitions etcetera.

So it was very much a learning process - a challenging but rewarding one.

How do you expect this acquisition to benefit Ninja Kiwi going forward?

Stephen Harris: We think that the biggest benefits will come from tapping into the experience and expertise across the other companies in the group; on the gaming side, Innogames, Hutch and Kongregate are all more experienced in marketing and user acquisition than we are, and between them have a ton of data smarts that we can hopefully use to improve some of our decision-making.

We’re happy to see how excited our staff, and the staff of other group companies, are to work together to improve our games in every aspect.

There are also a number of opportunities beyond the gaming side of MTG. Our IPs have seen some tremendous organic growth in the streaming world on platforms like Twitch.

We’re excited at the prospect of tapping into the esports arena with the likes of ESL and DreamHack, the leaders on the global esports scene. Mobile esports is growing crazy fast, so we’re excited to look into what that can mean for our games and our players.

How do you expect Ninja Kiwi's strategy to change under new ownership?

Stephen Harris: We’ll make some relatively small changes in early game launch testing and marketing, but we don’t think our strategy will change much at all, and we don’t expect people on the outside to notice much of a change.

MTG believes in us and in the broader team, as much as they believe in our strategy and the games we have created. We remain just as committed to the Ninja Kiwi player community as ever, and will continue challenging ourselves to innovate and go above and beyond with every new title - this acquisition will just enable us to become even better.

What will the Bloons series look like under new management?

Stephen Harris: We’re not going anywhere, so it’s not going to be under new management! As always, we want the Bloons universe to continue in its upward trajectory of awesomeness. We’re particularly excited that Bloons TD Battles 2 will be launching this year, which should take the series to new heights.

Back in 2012, you acquired Digital Goldfish. How did that deal work out for Ninja Kiwi?

We’ve certainly had conversations with people by whom we’ve been very glad not to have been acquired.

Stephen Harris: The deal worked out really well; Digital Goldfish was a games studio with immense mobile expertise and familiarity with our games, so at the time it was a real no-brainer.

The choice was either to spend 18 to 24 months spinning up our own mobile studio in Auckland or to join forces with an established studio we knew and trusted.

Do you think acquisitions in the mobile space will continue at the rate they did in 2020?

Chris Harris: As long as they are advantageous to all parties, and as long as credit is accessible, we expect so.

Stephen Harris: Sometimes yes, sometimes no. Companies get acquired for their own reasons - but if it’s all about the money, it probably won’t work out very well for the underlying company and IP.

We’ve certainly had conversations with people by whom we’ve been very glad not to have been acquired.

What advice would you give to companies that are either looking to make an acquisition, or be acquired?

For a small to medium company, its founders are often still vital to the success of the business. It’s important to be clear with yourselves, and with each other, about the reasons for selling, and to be as transparent with one another as possible.

Lastly, don’t plan to ‘take the money and run’ - certainly not without good succession planning. You are risking the livelihoods of your employees, as well as the time and money of the purchasing company.