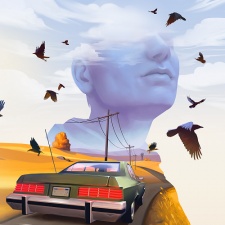 This week, we spoke to Mad About Pandas creative directors Patrick Rau and Dan Mayer about the formation of the Berlin-based studio and launch of Hitchhiker - A Mystery Game on mobile and Nintendo Switch.

Patrick Rau: It started in 2005 when we had the idea for a game in which players use hijacked spaceships to shoot and spin the traffic signs of interplanetary cities to create a "trouble race". After four years of pitching, Ubisoft came around and funded the game, resulting in Galaxy Racers being released for the Nintendo DS.

After the decline of the Nintendo DS market, we moved to self-publishing games for iOS and produced The Great Jitters: Pudding Panic. This one actually won the PocketGamer Gold Award back then, but unfortunately is no longer supported. Since the game was made with its own engine, updates proved too costly over time.

In recent years, we’ve made a strategic shift towards making games that have a strong narrative focus, with a focus on mobile, PC and console.

It’s tough at the moment unless you have the stomach to produce free-to-play games.

Dan Mayer: The focus of our day-to-day work has naturally shifted over the years towards mentoring and business development, however, we still love to get our hands dirty in the creative process. With Hitchhiker, for example, we found time to direct the game design and narrative, which was very gratifying.

What’s important in the life of an indie is to approach every day with optimism and persistence. It can take a long time to secure funding for an indie game, often only after many rejections. A positive, stubborn attitude has kept us in business for more than 15 years.

Patrick Rau: There’s not much of a safety net for indies: you can make almost all the right moves and still wind up in hot water. In 2015, we had to file for bankruptcy because we were unable to repay a loan from the Berlin investment bank. The game produced with this loan was very well-received but just didn’t deliver the numbers.

It was a tough experience to go through, though we rebooted the company and retained our entire team. The crazy part is that another mobile game we were working on at the time became a financial success, yet we never saw a penny from it as it got sucked up in the bankruptcy.

Patrick Rau: It’s tough at the moment unless you have the stomach to produce free-to-play games. When we started with mobile, there was a market for nicely crafted premium casual games. This market almost entirely disappeared when the free-to-play model took over.

There’s a specific mindset and investment model that one needs to support a free-to-play release for the several months that have to pass before you have the chance to see any money. Free-to-play also changed the way games are crafted: you design to make players hooked, and to guide them to a point where they are willing to pay money. This is not our cup of tea.

We can’t say too much about it yet, other than that it’s set in 1970s San Francisco and in present-day Berlin...

This is why we decided to create Hitchhiker for PC and console, inspired by cinematic narrative titles like Firewatch, What Remains of Edith Finch, Oxenfree and so on. Luckily, Apple Arcade suddenly materialised and re-shaped the mobile landscape for the better, sp now games like Hitchhiker have a natural home on mobile devices as well. We love it.

Could you tell us about Hitchhiker - A Mystery Game, and why it felt right for mobile?

Dan Mayer: There are a few factors that make Hitchhiker a good fit for mobile. It’s a very auditory experience, for one: the game’s sound design, voice acting, and music are a big part of the game’s immersive appeal and these qualities come across just as strongly on a small screen.

Second, Hitchhiker offers a story experience that is easy to navigate with simple gestures - this removes the need for lots of small fussy UI controls and frantic poking. Finally, it’s just a very escapist game, and who wouldn’t rather be on a mystical road trip than doing whatever they’re doing at the moment?

Are you happy with the game's reception on the platform so far?

Dan Mayer: We’re quite pleased with the reaction to Hitchhiker so far. The community has given us great feedback about the game’s story, character development, visual aesthetics and originality. The game’s ending, as we expected, has been polarizing: some find it frustratingly unresolved, whereas others appreciate that the conclusion is left open to interpretation.

Most exciting for us is that the players who really love it have described it in the terms of an epiphany: a thoroughly emotional experience that actually shifts their way of looking at things.

Dan Mayer: Honestly, we are not about unlimited budgets. We're about making the games we want so we can tell compelling stories folded into an interesting art aesthetic.

So to answer your question a different way, our next game is something we absolutely want to make and are terribly excited about it. We can’t say too much about it yet, other than that it’s set in 1970s San Francisco and in present-day Berlin, and that it brings the narrative qualities of Hitchhiker together with a really compelling core game mechanic.

Patrick Rau: We want to continue to do our part to push the envelope of narrative-driven games, by producing titles that provoke, unsettle, amuse, and - most importantly - surprise. We like to see Hitchhiker as the first step in terms of defining a tonality that lies outside what one normally finds in games, and we’d like to continue to push those boundaries.