Auclair speaks to PocketGamer.biz on the importance of the audience, patience and data, and launching the Netflix partnership 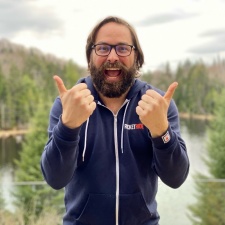 No prizes for guessing where Louis-René Auclair, founder of video games consultancy agency RocketRide Games, is during our Zoom call: a hotel room. It’s been an intermittently familiar sight during interviews over the last couple of years, even with travel hesitancy one of the many outcomes of the COVID-19 pandemic, and Auclair is eager for a return to face-to-face meetings.

"We have no chance but to go back [to live events]. It’s easy to not attend a conference when nobody’s there, but when people are meeting face-to-face again and you’re not? You’re gonna get beaten to the punch. Personally, I can’t wait to give some Canadian hugs to my games industry friends. They have been warned!"

Travel has been constant for Auclair since founding the agency in 2017, following his time at Hibernum. That bespoke support RocketRide aims to provide – "we don’t have a fixed menu à la carte. Our goal is to listen to what clients want, give them feedback, and then we decide whether we want to start working together or not" – necessitates the kind of clarity associated with face-to-face meetings.

I can’t wait to give some Canadian hugs to my games industry friends. They have been warned!

"We quickly realised that not only do people need connections to find the best people to sign the right deals, but also need help to make better concepts and pitches. Does your game have the right design to meet the best audience on the ideal platform?

"I’ve worked in the industry for 22 years, and I’ve always focused the pitching and creation of concepts on who’s going to play the game. A frequent early mistake developers fall into is making a game for themselves without knowing whether there’s an audience that also wants to play it."

In many respects, we know precisely what mobile games audience wants to play, with an alarming specificity: "I have a funny story: a friend who exited the games industry just came back, after two years, looked at the top grossing mobile games and they’re the same games as when he left."

For all the disruption and diversity of the mobile games environment, it can also be a space occupied by trend-chasing and iterations of the most popular titles, both from mobile and beyond. What is the most effective journey to sustainable, long-term success without having to be perpetually reactive?

"This is a conversation Casey [Lee, chief marketing officer at RocketRide] and I have a lot. Unfortunately, the mobile market is so fixated on the top grossing games that it can be difficult to take risks. So, people tend to repeat loops they know work rather than innovating. What we need to focus on is not what people are playing right now, but what they will play in two years.

"It’s difficult because you’re so influenced by what’s being played now and what people are talking about. Let’s take Clash Royale; five years ago, all the publishers were receiving Clash Royale pitches. But the second that game came out, if you’re still pitching a Clash Royale game that’ll be released in two years, you’re done, you’re too late."

Tracing your own path towards innovation is one thing, but there are two essential skills to charting your own course, and each feed into one another: decision-making and data analysis.

Pokémon Go was the overnight success that took 15 years to make. It never happens overnight.

"Games are incredibly data-rich now. But one of the most difficult and important skills to master is looking at data for what it is. Don’t try to get the data to tell you what you want; take it for what it is, then take action. That separation between your baby and the audience is tough. But if you can’t move past your own protective nature, you’ll have conducted a load of research and data gathering for nothing.

"John Hanke, CEO of Niantic, says Pokémon Go was the overnight success that took 15 years to make. It never happens overnight. Rather, it’s a lot of trial and error, shipping games early, going beta, player feedback rounds, and testing in order to get to the right place."

Passage on this rocket

"When it’s a bigger team, we plug the holes – for example, Gearbox needed help with their mobile publishing. But ultimately RocketRide is building itself as replaceable – our goal is to make that entity strong enough to work on their own. And if they want to continue to work with RocketRide, it’s because they want to, not because they need to.

"For small companies, you don’t have a big ship to steer so it’s about agility and reaching consensus-level decisions faster. That’s also where RocketRide can be more nimble with our clients. Got a mechanic you want to try based on feedback? Somebody on our team has tried it before, knows what happened, and we can come up with pre-emptive solutions to design flaws ahead of us. I like small teams because of that ability to iterate.

"We’re done so many projects, we have about 65 clients around the world, at any given time, and there’re 25 ongoing projects. We also love IP; one of the reasons we’re so happy to work with Netflix is because we love Hollywood IP!"

Are you still watching

In late January 2022, RocketRide announced a partnership with Netflix, having brought two mobile titles – Dominoes Café and Knittens – to the platform. The partnership is deep-rooted; with RocketRide’s business development team working ensuring a continuous stream of titles on Netflix’s mobile gaming platform, while its production, creative development, and brand management teams connect studios and developers with Netflix’s eye-catching IP suite. But, for such a tightly-knit collaboration, the partnership happened almost serendipitously.

"I like to say that the video games industry is the biggest small industry. Everybody knows everybody. So, when one of our team members knew somebody at Netflix was interested in mobile, we jump on a call. We’re expecting to ask, hey, can we license IP for some of our clients. Instead, Netflix tells us about their work on this programme and to get onboard. It’s a chance of a lifetime.

"It was very organic the way it happened: first call, second call, and then you find you’ve already started working together because you gel so well together. Very organic, which is how I like to do business."

Have someone who can come in when you can’t see the forest for the trees. We’re pretty good at seeing the forest.

With Netflix Games still in its infancy, one could understand or expect some consternation. But Auclair states that the partnership has not strayed wildly from RocketRide’s approach to working with games-centric entities.

"It’s the same way we help studio clients come up with better ideas. We come up to them with multiple games concepts, talk about the game itself, how it’s built and how it links with their audience, and hopefully there’s an IP that matches. That’s one of the first things we do.

"Like anything in mobile, data speaks volumes. The more data we get – and it’s still brand new, we’re just starting – the better what games can work, and you focus on what the players want and try to bring new stuff to see if anything sticks.

"What really attracted me to working with Netflix was their desire to make great game content. If you look at their history, they’ve always taken their time with new content and new ideas, building their time carefully looking at what works and what doesn’t. That’s what happened with Stranger Things, it started small and escalated like crazy."

Netflix’s track record of successfully launching and prop up franchises is well-established. As is its capacity to prematurely cut support. One cannot help but wonder how much leeway RocketRide has in exploring and revitalising Netflix’s IP catalogue, or is in lockstep with Netflix’s active library.

"It’s a bit of both. But I think it comes back to wanting to make a great game. A great game with the right IP is always going to work. It’s not about forcing games or IP or collaboration, but when it makes sense, that’s when we push for it."

Currently, Netflix Games will be available for subscribers, akin to Apple Arcade and Google Play Pass, with all games free from IAPs or in-game advertising. In an industry perpetually defined by the new – free-to-play, IAPs, and perhaps even play-to earn – the subscription model may seem conservative. Not so to Auclair.

"You see what’s happening with Microsoft Game Pass. The subscription model is something that can be very good in the future, as long as the content is as curated as possible and the games are, individually, a strong reason to be there.

"You don’t want to create a discovery problem within a subscription model, so you need to have games that meet the audience’s needs through a tightly curated approach." Good news for Auclair, who is effusive about Netflix’s user recommendations. Bad news for me, who is more likely to waste 15 minutes haplessly browsing before picking up a game instead.

"So I personally like it. I know they have so many subscribers that are obviously very happy with their service, and offering them an extra something will keep them engaged with the IP and service and ultimately build brand loyalty."

Netflix Games won’t come to define RocketRide Games, and vice versa. But the partnership does feel like like-minds finding each other.

"There are multiple games in production, some shipping this year, others next year but you know I can’t talk about them. But the relationship between Netflix, the studios we represent, and RocketRide is something I’m really happy with. It’s always good to have someone who can come in when you can’t see the forest for the trees. We’re pretty good at seeing the forest."