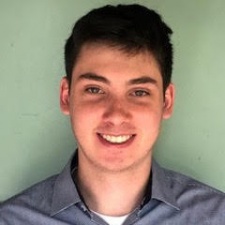 Today, we're speaking to Jack Hurley from Hurley Games, who created and pitched Letter Pick, at The Digital Big Indie Pitch #14 (Mobile Edition) and walked away as the third-place runner up.

Jack Hurley: I actually don’t have an indie studio or belong to a team. I just really enjoy making video games, and I want to get into the gaming industry. As a recent college graduate, I thought working on a project by myself, where I do all of the designing, coding, and testing would be a good way to get the attention of potential employers.

Can you tell us about Letter Pick that you pitched at the competition?

Letter Pick is a word game that you play once a day and it is available for free on the App Store. The overview of the game is you pick six letters from the alphabet and then use them to make the highest scoring word you can. It sounds simple, but the letters you have to choose from are in groups of five and you can pick only one of them. So for example, if ’s’ and ‘a’ are in the same group, you’ll have to choose between them. If that was too confusing, you can just think of Letter Pick as a mix between Wordle and Scrabble.

What do you think are the most unique and interesting aspects of Letter Pick that players may never have seen before?

The “one game a day” idea may not be very unique anymore because of Wordle, but it’s my favorite aspect of the game. In Letter Pick, the way the letters are grouped is the same for everyone and changes each day. Words that were possible to make one day may not be possible the next. This makes it feel like every day is a new game and you are competing against your friends whose words and scores you can easily see on the leaderboard.

Word-based games are having something of a renaissance at the moment. What made you choose this genre, and what do you think you bring to it that may not have been seen before?

I’ve always been a fan of word games. My grandpa used to send me pictures of the Jumble that were in the newspaper, and we would talk about them and how long they took us to do. So, I was able to see how word games can help you stay in contact with friends and family, and I always liked that. And now because of playing word games on phones instead of in the newspaper, I think there are a lot more possibilities for different types of word games.

How did you come to choose the platforms that you would develop Letter Pick for?

I chose to make it a mobile game because word games are great to do on the go. Just when you need to kill a couple of minutes, you can take out your phone and do the day’s Letter Pick.

As I said before, I’m not really trying to make it as an indie developer, but my experience developing Letter Pick has shown me that even simple games are very time consuming to make. So it is tough if you have an idea for a really complex game, but I think that simple games can be just as much fun as those complex games, you’re just kind of limited in what you can do.

I’m one of those developers just starting out, so I’d be curious about what others say. If I had to give advice it would be to make games that you like to play.

I really enjoyed being able to share my game and get feedback from people in the industry. It was also great hearing what other indie developers were working on

I got good advice on needing to improve the game’s UI, and I think was able to address that in the last update. I’m still hoping to maintain connections with those in the gaming industry.

I’m hoping for new players, and for it to become part of people’s daily routine. As for the future, there will be more projects, just not sure what they will be.