Does Royal Revolt 2 make a run on your wallet?

Rise of the republic 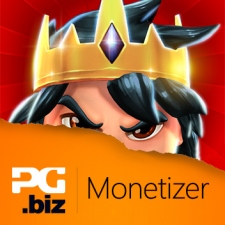 I've been raving about Flaregames' Royal Revolt 2  for a couple of weeks in my Diary of a Promiscuous Gamer column, so now it's time to dig down into its monetisation techniques and market success.

It's a hybrid city-builder and castle attack/defence game, which builds on the gameplay foundation and the 10 million downloads of the original Royal Revolt  title, which was released in 2012.

Style-wise, it's pretty cute - even young-oriented - with 2D cartoon characters giving you advice on what you should be doing, while the game graphics themselves are beautifully styled 3D, albeit it with a fixed camera angle and limited zoom.

That doesn't really matter, though, as you can easily scroll around your castle, collecting resources (gold and food), while upgrading the various buildings. Unlike a Clash of Clans, the building set is limited and you can only build in pre-determined locations.

But outside of the castle walls, you can get creative in terms of building your defences. You can add bends into the attacker's path, as well as placing traps and towers, which automatically attack any enemy troops out to steal your loot.

One aspect of the game that I really like is the integration of the city-building and the defence building within one base and screen. You can clearly see what's going on with both, which makes it simple in terms of deciding where to spend your gold in terms of the upgrading process.

There's also a helpful suggestion prompt to tell you what's next to upgrade (if you want that sort of hint.)

As is typical in such games Royal Revolt 2 uses a multiple builder or worker system. You get the first two workers for free, with the third worker costing 500 gems or $4.99. The fourth worker costs 1000 gems ($9.99).

Also typical is that you can use gems to speed up any building process, and if you don't have enough gold to start an upgrade, you can covert gems to gold. Royal Revolt 2  uses a percent fill system, whereby you can fill your treasury at 25, 50, 75 or 100 percent rates.

As is often the case with these systems, filling by 100 percent gives you the best deal for your gems, but the game will also give you a spot conversion rate if you want to convert gems to a specific amount of gold so you have enough gold to start your next upgrade.

The other resource, food, is required to launch attacks on other castles.

So much for defence. In terms of attack, you unlock and upgrade different types of troops and also have a single powerful hero character, whose movement you control directly by tapping on the screen.

All troops will automatically attack, so your control is putting them in front of something attackable. Your hero can also cast different spells, some of which require gems.

In general, though, the attacking phase is a combination of resource management - you have to choose which sort of troops to spawn, and you only have fixed time period in which to defeat the enemy castle, stealing its gold in the process.

Of course, the really nice part of the game is that the defensive path you attack up is the one that the other player has designed.

In terms of gameplay, then, Royal Revolt 2 is a great example of making things simple, good-looking and enjoyable.

This attention-to-detail is reflected in the monetisation options too.

As previously explained, the game uses some standard techniques in terms of consumables - using gems to buy gold or buying limited time shields - as well as permanent items like more workers. Other permanent purchases include more attack slots so you can choose between a wider range of unit types, and more spell slots.

Royal Revolt 2 is also clever in terms of forcing players to use small amounts of hard currency to clear ground for defence placement, and it does a great job in terms of offering discounted retail bundles. You can even spend gems to upgrade your hero character, circumventing the experience points-based progression path.

And the game is pretty generous in terms of its reciprocity, giving you many more gems for achievements than it forces you do use, so there are no hard paywalls.

Most games typically have a DCr of 1.3-1.8, so this is higher but not significantly so.

The game's Unit Currency Conversion rate (100-200) is broadly the same as that standardised for this type of strategy game by Clash of Clans (UCC: 100-140). Indeed, Royal Revolt 2 uses many of the monetisation techniques popularised by Clash of Clans  but layers on its own specific techniques to match its gameplay.

Looking at its app store performance, Royal Revolt 2  got off to a good start with downloads, but couldn't keep up its momentum.

In terms of our Popularity ratio (basically its performance on free app charts, indexed to the US chart), it went top 100 in 123 countries on iPhone but top 10 in only 13, peaking at #61 in the US.

In terms of our Success ratio (measuring top grossing chart performance), it did better (going top 100 in 80 and top 10 in 27 countries, although it again performed badly in the US (and other key markets like the UK).

When we combine the Success and Popularity ratios into our Monetisation Efficiency ratio (a measure of how well downloads are converted to revenue), we can see that Royal Revolt 2 on iPhone scores 2.5.

This is high (higher than Boom Beach, although not as high as Clash of Clans), and underlines that it's a highly monetised games that can do well in relative terms of getting players to spend money.

However, it didn't get enough sustained downloads on iPhone to be a true commercial success.

When we look at the iPad version of the game, the situation is similar but surprisingly also worse. The game was highly downloaded - top 100 in 149 countries, top 10 in 103 and had a #12 peak on US download chart.

Yet Royal Revolt 2 didn't perform well on top grossing charts, particularly in the US where it only peaked at #81.

Indeed, compared to a Monetisation Efficiency of 2.5 for iPhone, for iPad it was only 0.06, although both games have a Success ratio of 0.004. (We treat any game with a score of 0.01 or more a commercial success.)

This is interesting as it underlines our Monetisation Efficiency isn't a measure of a game's inherent IAP economy, but a measure of how that economy works in the real world; hence the iPhone and iPad versions of Royal Revolt 2 performed very differently.

(NB: The game was also released on Google Play, but didn't break into any top 10 charts, so returns a null result.)

Finally, looking at our original Monetiser ranking - which is a comparative measure of a game's inherent IAP economy - Royal Revolt 2  scores 250, well over the score of 100, above which we label any game highly monetised.

Despite being a well designed, well presented and enjoyable F2P game, which builds on and expands many F2P monetisation techniques in a smart manner, Royal Revolt 2 hasn't capture the imagination of players, or their wallets, particularly in terms of the key - and most competitive - western markets.

(It did quite well in South Korea, though, as covered in our recent Charticle.)

Perhaps the cute tone in what is a midcore genre proved off-putting.

Flaregames on becoming a boutique publisher and taking Fieldrunners F2P