Everyone gets free golden in-game trophy 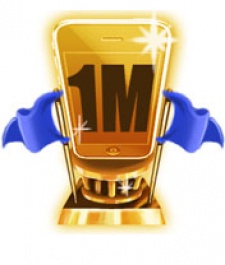 January 30th, 2012 - 05:20pm
By Matt Sakuraoka-Gilman
PerBlue has been in the headlines recently for all the right reasons, with its location-based game Parallel Kingdom helping the SOS Children charity back in September 2011.

Another positive story emerges from PerBlue with the announcement that Parallel Kingdom has just surpassed the milestone of a million players.

To celebrate, players of the game on iOS, Android and on the web have been awarded a 1M Players trophy in-game, which can be displayed on their home turf.

"One million Parallel Kingdom players is a dream come true for all of us who spend each day thinking about how to make our game better than it was the day before," said Justin Beck CEO and co-founder of PerBlue.

"Over the past three years, we have strived to challenge and entertain our growing community by expanding levels, adding new missions, creating opportunities to connect with each other and to make a difference through social giving efforts.

"Our team is dedicated to raising the bar for Parallel Kingdom players as they continue on their odyssey."

To find out more about the team at PerBlue (and its charitable work), check out its website.