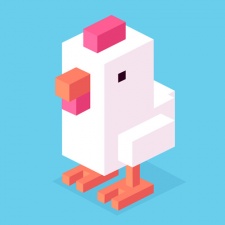 This is up significantly from the $1 million from iOS announced in mid-January.

Since that announcement, the game has been released on Google Play, generating over 10 million downloads in 20 days.

Developed by a two-man team in 12 weeks using Unity, one of the reasons for the free-to-play title's success with video advertising is the way in which the system is integrated into the gameplay.

Watching videos earns the player coins they can then use in an one-arm bandit to unlock one of the 60 in-game characters. Each character changes the graphical look or feel of the game, but crucially players also earn coins by playing the game, meaning watching videos is just another way to earn coins.

As developer Matt Hall told us in our Making Of feature, Crossy Road was designed without paywalls, timers or pay-to-win features.

As for Unity, it's keen to point out that why Crossy Road's success is impressive, many other developers are generating significant revenue from Unity Ads.

"The success of Crossy Road with Unity Ads shows that mobile games can make millions of dollars with ads that users choose to watch," commented Laakkonen.