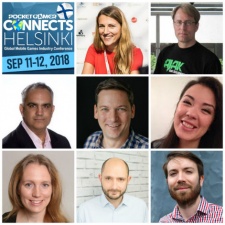 The international Pocket Gamer Connects exhibition and conference returns to Helsinki this September for its fifth outing in the heart of Finland’s capital city.

Focusing on the games industry for mobile, PC, VR, AR, Nintendo Switch and blockchain, the country’s biggest B2B games industry event will draw over 1,200 delegates from more than 600 companies to enjoy over 120 speakers across 14 tracks over two packed days this September 11th and 12th.

The mobile games industry remains the driving force of the event, with the biggest speakers exploring the most crucial issues affecting games developers, publishers and any professional working in the sector worldwide.

The 12-track conference schedule has been painstakingly curated to offer something to all levels of experience and who better to learn from than one of the most successful mobile games studios of all time? King’s lead producer, Sabrina Carmona, will reveal the production techniques that have kept the home of Candy Crush at the forefront of the sector for more than half a decade.

And she’s in good company with other big hitters on the schedule including no less than Unity; and Epic Games’ Sjoerd De Jong will take developers deep into the darkest corners of the Unreal Engine.

Gameloft’s studio director Richard Arroyo will lift the curtain on the dark arts of directing to discuss the best creative practices to influence, persuade and control the audience when creating games.

Hear first-hand the secrets and strategies that have proven effective for developers, including Frogmind co-founder, Teemu Maki-Patola, who will recount the challenges and achievements in the soft launches for Badland Brawl and Rumble Stars Soccer.

Mathias Gredal Nørvig, CEO at SYBO Games, will also reveal how making Subway Surfers changed the company and where it is running to next.

One session that will be of interest to anyone working in VR will be the conversation between Pablo Fraile, director of ecosystems at ARM and Kristoffer Benjaminsson, CTO at Fast Travel Games, who will share with the audience lessons learned from converting Apex Construct from console to mobile VR.

Jam City vice president Jeremy Horn will look back on how the move from casual to mid-core has led to the expansion of the company as it carves a niche in a highly competitive genre.

While Jam City makes the move from casual to mid-core, our audience has shown a lot of interest in moving in the other direction to target the hypercasual sector. When our beloved audience speaks, we listen, so we’ve added a whole new track dedicated to it for Helsinki.

Here, you’ll find the likes of MojiWorks CEO Matthew Wiggins as he dissects messaging games and the art of socialising gameplay mechanics, while Quicksave CEO Elina Arponen joins a panel session exploring the keys for success in hyper-casual and chat app gaming.

Anyone looking to get involved in the sector won’t want to miss Alexander Krug, CEO at SoftGames, as he offers a concise overview on messenger games for developers. Janos Perei, CMO at TreasureHunt, lays out the challenges and possible solutions for discoverability and user retention, while Cobra Mobile’s Mark Ettle settles in for a fireside chat about publishing messenger games.

Appodeal COO Natalie Portier will explain how mobile advertising is evolving and what every dev needs to know to monetise their games in 2018 and beyond. HyprMX’s Robert May will make the case for rewarded and interstitial video advertising too.

Meanwhile, Richard Downey, global new business director at The Specialist Works, will look at the offline world to find out how advertising there can boost your mobile and digital acquisition performance.

Anyone planning international coverage for their title should join Peter Fodor, founder and CEO at AppAgent, for a fireside chat with Small Giant Games’ user acquisition manager, Antti Paikkala, as they discuss how to create a media plan for a global launch.

Chartboost will also be on hand to offer advice on creating the right campaign for your players, as well as taking part in a panel on gold standards for acquisition with Miniclip. And you won’t want to miss Pixonic’s insightful presentation on easy ways to start receiving positive ROI through influencer marketing.

From UX to future visions

Other topics will run the gamut from User Experience with UX-fit’s Mark Ollila and shared screen gameplay thanks to Erik Pöntiskoski, founder at Dodreams Game Studio, to future visions as seen by Secret Exit’s Jani Kahrama and the rest of the panel.

DeltaDNA will lead a warts-n-all panel session revealing the biggest mistakes games developers still make. This panel features Ogury’s Lauren Greyson, who will also deliver a standalone seminar explaining how data can save your studio from failing.

Torulf Jernström from Tribeflame will detail the studio’s strategy game with events built into its core, and Wooga’s senior product manager Tim Shepherd will look at live ops and bringing a seven-year-old game back to life with the story behind Diamond Dash’s resurrection.

We’ll learn about the transition from casino to casual gaming thanks to Kama Games’ Vyacheslav “Slava”, and Veli-Pekka Piirainen, CEO at Critical Force, will share his thoughts on the enviable position of balancing company culture during rapid growth.

Along the way, we’ll also hear from Fingersoft’s Mikko Kirmanen, Futureplay co-founder Jami Laes and many, many more.

Mobile may still be the focus at Pocket Gamer Connects, but the Connects X track broadens our horizons to include other formats such as PC, Nintendo Switch, and VR and AR. While many of the seminars in other tracks will address topics relevant to any games developer, there remain platform specific issues that deserve their time in the spotlight.

We’ve already seen VR represented by the Apex Construct case study and it’s the turn of AR as Shipyard Games CTO and co-founder Teemu Harju shares some of the dos and don'ts of developing location-based mobile AR games.

Minna Eloranta from Secret Exit will also talk about the experience of publishing games for Nintendo Switch around the world.

New for 2018 and hot from its debut in San Francisco this spring, Blockchain Gamer Connects is a partner conference of PGC Helsinki with four tracks from the pioneers who are leading exploration of the cryptogaming frontier. Your ticket grants you access to both events.

We have some great speakers lined up specifically for Blockchain Gamer Connects, but that’s another story for another time…

If you like what you see above, tickets are available right now for Pocket Gamer Connects Helsinki 2018.

We’re still accepting submissions from anyone interested in speaking at Pocket Gamer Connects Helsinki. If you would like to share your expertise with our audience, submit your talk here.