Hear from some of the foremost practitioners in the sector, including Alto.io, Gamertoken, Gumi and Reality Clash 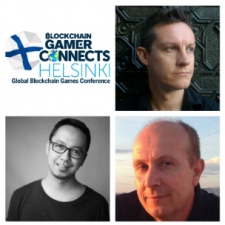 This September, Pocket Gamer Connects Helsinki returns for its fifth outing in Finland's capital city - and this year, we’re bringing a friend.

In addition to the 12 conference tracks delivered by 120-plus world-class speakers - you can read more about the first confirmed speakers here - you’ll find another four tracks entirely dedicated to games and the blockchain in Blockchain Gamer Connects.

Your ticket will get you into both shows and you could save up to $400 with our Early Bird prices until the end of the month.

Hot from its San Francisco debut this summer, the two-day exhibition and conference runs alongside Pocket Gamer Connects and adds a further 40 speakers from the foremost practitioners in the sector.

The schedule has been carefully created to include content for all levels of experience, from covering the basics for anyone looking to include blockchain in their next project to forecasting the future trends and techniques for trailblazers already working with the technology.

Confirmed speakers already include Alto.io, Gamertoken, Gumi and Reality Clash, with plenty more to come. Hoard Exchange’s Martin Amor will examine what the blockchain scene has to offer triple-A games developers, while Fractured Labs CEO Stephen Arnold will explain why it chose Blockchain for its project.

Here’s a selection of the speakers at Blockchain Gamer Connects Helsinki:

And that’s just for starters. With new speakers signing up daily, check back here to find out who joins the illustrious ranks appearing this September 11th to 12th.

Book now and save

You can still save up to 20 per cent on the ticket price with our Early Bird discount, which ends at midnight July 31st. Book your ticket now!

Win a chance to pitch your blockchain game to investors free, $15,000 prize pool