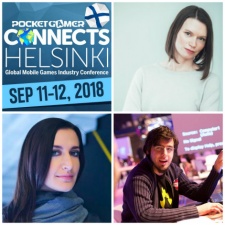 Early Bird ticket prices offering up to £400 discount are still available until the end of July, but now it’s time to reveal the new speakers that will join the 12-track conference schedule covering mobile games, PC, VR, AR, blockchain and handheld consoles on September 11th and 12th.

Hyper-casual is now officially a ‘thing’. Developers everywhere are picking up on the massive audience for truly pick up and play titles.

The inspirational studio that arguably kicked off the whole scene is France’s Ketchapp, which went on to be acquired by publishing megabrand, Ubisoft. We’re delighted to announce that Ketchapp’s CRO, Christian Calderon, will be speaking at our September event.

He’s joined on the hyper-casual speaker roster by Gamee’s Bozena Rezab, and Laurens Rutten, founder and CEO at Cool Games. Mintegral’s Sean Parmenter will take the audience on a tour of the latest trends in gaming, and we could not be more pleased that Vlambeer’s Rami Ismail has agreed to address the audience in Helsinki.

We’re always innovating and updating our conference content to reflect the changing trends and hot topics in the games industry. One of those new additions addresses the phenomenon that is influencer marketing.

There’s little doubt that you’ve heard of Playerunknown’s Battlegrounds and Fortnite by now. These two battle royale behemoths now straddle the gaming world and have inspired many, shall we say, ‘tributes’ from other developers.

What you may not be aware of is that both games benefitted from influencer campaigns by German marketing pioneers, Nevaly. We can’t wait to hear what MD David Kim has to share with the audience at Pocket Gamer Connects this September.

Living in the clouds

Streaming games and cloud computing is the future. Even Microsoft’s next generation of Xbox consoles is adopting the technology. But you don’t have to wait until 2020 to stream games just like movies or music.

Finland’s Hatch is already doing just that for mobile gamers in 18 countries. The subsidiary of Rovio - you know, the gang that brought Angry Birds to conquer the world - will be at Pocket Gamer Connects Helsinki sponsoring the Cloud Gaming track, with CEO Juhani Honkala sharing his experience and insight.

VR and AR have had a tough time of it since the hype of 2016 died down, but RiseAngle’s CEO Kaveh Vahdat recognises that XR is still in the early stages. No developer working in immersive media should miss his presentation on overcoming challenges to generate revenue and what the future holds for the medium.

Esports, amiright? Bigger viewing figures than some mainstream sports! Who knew? Well, these guys, to be fair.

We know a lot of developers harbour ambitions to create the next great esport, so we’ve rounded up some of the biggest names in the sector to share their secrets with you. You’ll hear from Arne Peters, CEO at eSports.com; Sergi Burgos, CEO at LVP; Carlos Estiguarra, CEO at Gazeus Games; and GINX will be there too.

And the names keep on coming...

Hot from its debut in San Francisco this summer, Blockchain Gamer Connects is a new partner event for 2018. Four additional conference tracks cover everything from blockchain basics to future trends – and your ticket grants you access to both shows!

As well as featuring its own pitches for dev studios looking for investment, Blockchain Gamer Connects Helsinki is also the venue for the grand finale of the Alto Crypto Gaming Challenge powered by BlockchainGamer.biz with a prize pool worth $150,000.

As well as the two seminar programmes featuring a total of more than 160 world-class speakers, there will also be vibrant expo space; Big Indie Pitches with season sponsor G-STAR; a game jam; workshops; matchmaking; PechaKucha-style presentations; and a whole conference with four more tracks on blockchain gaming.

Brought to you by

Time is running out for your chance to save up to £400 on the price of admission. Early Bird prices mean up to 20 per cent savings, but hurry - the offer ends at midnight, Tuesday July 31st. Book now!